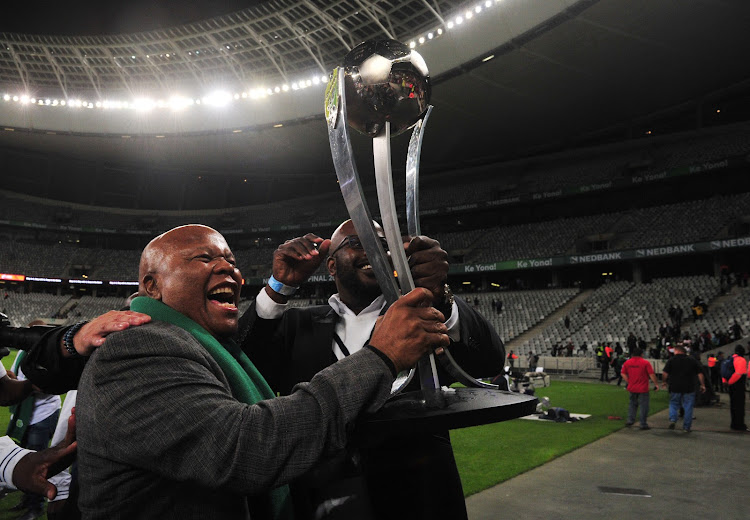 Free State Stars owner and chairman Mike Mokoena (L) lifts the Nedbank Cup with son Rantsie (R) after his team beat Maritzburg United in the final in Durban in May 2018.
Image: Ryan Wilkisky/BackpagePix

Mokoena was one of the founding members of the National Soccer League (NSL) and Premier Soccer League (PSL) chairman Irvin Khoza confirmed the death of the long-serving Free State Stars chairman on Wednesday morning.

"Our prayers are with the Mokoena family‚ especially its mariach Ausi Joyce Mokoena who has been a pillar of strength that propped Bra Mike up over the years‚" Khoza said in a statement.

"Mike Mokoena was a self-made man that took the fruits of his toil‚ which he could have used for his personal benefit and that of his family‚ and invested selflessly into football.

"The Free State Stars payroll that he created and maintained‚ sometimes under very trying circumstances‚ is a source of viable livelihood for many."

Mokoena was also a longstanding member of the PSL executive committee and Khoza said he managed to shine a light on his hometown Bethlehem during his many years in football.

"He shined a light on a little known town in South Africa‚" he said.

"He literally put Qwa Qwa and the town of Bethlehem on the map.

"The economic activity generated by Free State Stars in that part of the country is a powerful legacy of a passionate man that always maintained that "where there is a will‚ there is a way."

This is a developing story.....

Employees of Bidvest Wits are shocked at the manner in which owning company Bidvest allegedly kept the club in the dark about the now-confirmed sale ...
Sport
2 years ago

Tshakhuma Tsha Madzivhandila (TTM) owner Masala Mulaudzi has completed the takeover of Bidvest Wits with its players but they will not be retaining ...
Sport
2 years ago