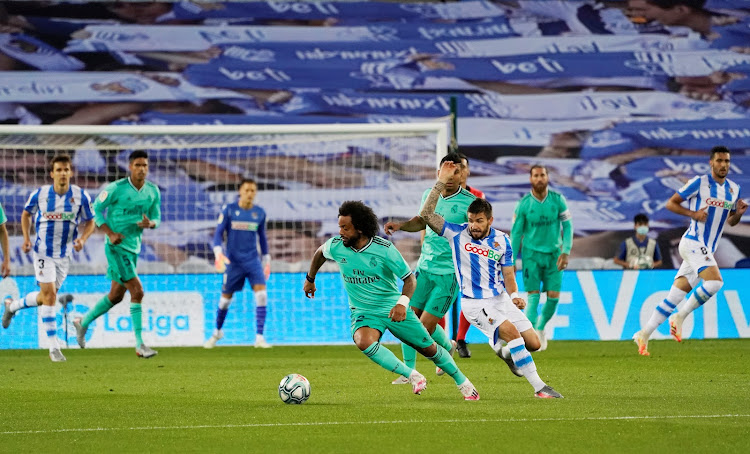 Real Madrid took control of the Spanish title race by beating Real Sociedad 2-1 away on Sunday to move top of La Liga above Barcelona after a second-half high on controversy.

Madrid captain Sergio Ramos broke the deadlock in the 50th minute by converting a penalty after Vinicius Jr went to ground in the area following contact from Sociedad's Diego Llorente.

Sociedad thought they had levelled with a strike from Adnan Januzaj from outside the box but the goal was ruled out after a VAR review showed Mikel Merino obstructing the view of Madrid keeper Thibaut Courtois without touching the ball.

Their sense of injustice deepened a minute later when Karim Benzema doubled Madrid's lead in the 71st after controlling the ball with the top of his arm although Merino ensured an exciting finish by lashing in off the crossbar in the 83rd minute.

However, Zinedine Zidane's side clung on for the win to move level with Barca on 65 points after 30 games but climbed above the Catalans, who were held 0-0 at Sevilla on Friday, due to a superior head-to-head record. Sociedad are sixth on 47.

Madrid's trip to San Sebastian was full of intrigue after Barca failed to beat Sevilla and the Catalan side's defender Gerard Pique said the title was now Madrid's for the taking.

He appeared to suggest decisions had gone Madrid's way in their 3-0 win over Valencia last Thursday.

Zidane's team had benefitted from a Valencia goal that was chalked off for an offside against a player who had not touched the ball and there was a tangible sense of deja-vu when Januzaj's equaliser was ruled out due to Merino's position.

"We're angry with everything but mainly with the way we lost, because the little details and the big moments went against us," said Merino.

"I was at least five metres from Courtois when I was flagged offside.

"I don't know if the same thing would have happened had it been in the other area but the flag went up and we feel that we have been wronged."

"In my opinion we were the superior team against a very tough opponent, we knew how to cope with them and how to hold on to our lead," said the Uruguayan.

"We're so happy because it was such a hard game and when you win a game like that you should enjoy it."

Both the South Africa Football Association's (Safa) vice-presidents were removed in an apparently dramatic and emotional national executive committee ...
Sport
9 months ago

Long-time SA football administrator Ria Ledwaba is heading for a collision course with the SA Football Association (Safa) after she vowed to ...
Sport
9 months ago
Next Article