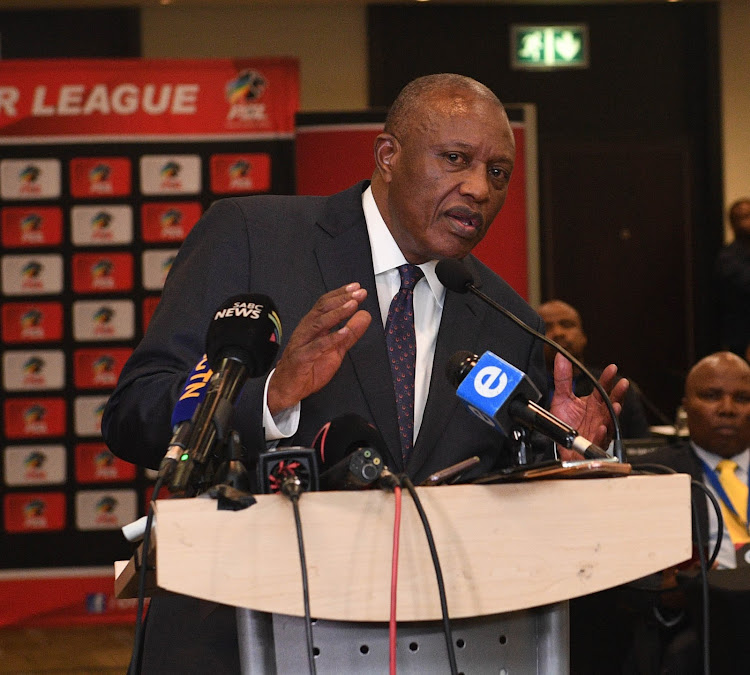 PSL chairman Dr Irvin Khoza addresses the Media after a Board of Governors meeting in Johannesburg on March 18 2020.
Image: Sydney Mahlangu/BackpagePix

Premier Soccer League (PSL) chairman Irvin Khoza has warned that there are no guarantees the Premiership and national first division clubs will receive their grants at the end of July.

The 32 teams in the Absa Premiership and GladAfrica Championship usually get their grants and ex-gratia fees at the end of July‚ but this is unlikely if the players do not return to the field soon to complete the season.

“That is why it is urgent for us to (restart the season) because beyond the 30th of June we won’t be able to pay the clubs their grants and if that happens it means we must now revert back to section 189 for retrenchments‚” warned Khoza.

“That is the reality of the situation‚ it has been stressful for the clubs. Some of the clubs took it upon themselves to do some kind of dealings with the players by asking for reductions of about 30 to 40 percent of their packages.

"The unfortunate part is that from the 30th of June‚ that was the last time we get the grant. What we find is the new season going forward and the sponsors at this point in time‚ especially the broadcaster‚ for the last three months they have allowed for us to pay and be paid without asking questions in terms of what we are giving in return.

“What we have done as the PSL is that we have made sure that we stick to what we promised the players until the 30th of June. I also want to thank Fifa for allowing us to engage the players and the Players Union that they must corporative for sporting integrity.

Khoza admitted that the clubs have been under severe strain and pressure due to Covid-19‚ adding that other sides made applications to the Unemployment Insurance Fund (UIF) for their players and staff.

“Whatever dates that we talk about‚ training days for the teams for or whatever resumption‚ we start counting back because we need six weeks to finish the season‚" he said.

"If we don’t have the six weeks‚ it is going to be difficult to end the season. PSL teams have been under severe strain and stress because they don’t have reserve funds most of them.

"We hope that sooner rather than later we will be resuming the business and less stress for the clubs. I must indicate that there was a meeting that took place between us and the Minister of Labour to give advice on how to go about the issues of UIF and a few clubs did apply for that.”

Kaizer Chiefs led the Premiership by four points from second-placed defending champions Mamelodi Sundowns when football was suspended due to the coronavirus on March 16.

The Premier Soccer League (PSL) clubs and fans will have to wait a little longer before they find out when is the season is going to resume.
Sport
1 year ago

The Premier Soccer League (PSL) has put forward 11 playing venues in Johannesburg and Pretoria for the resumption of the 2019-20 Absa Premiership ...
Sport
1 year ago

The Premier Soccer League (PSL) is likely to receive strong push back from most of the unhappy clubs who have been told that they must foot the bill ...
Sport
1 year ago