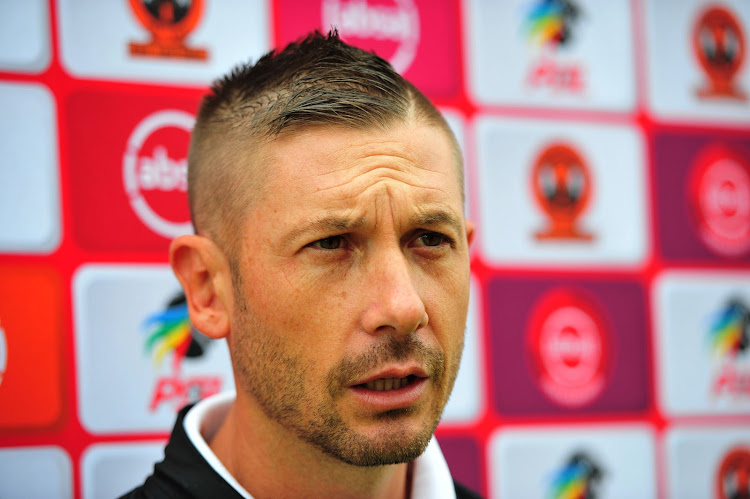 Alan Clark says the offer he received from a European club was just too good for him to turn down.
Image: Philip Maeta/Gallo Images

Alan Clark had an opportunity to join a club in Kosovo who could not wait for him to complete the 2019-20 Absa Premiership season‚ and which he could not turn down‚ he said explaining his decision to resign at Black Leopards on Tuesday morning.

Clark could not reveal the name of the club‚ but said it is an assistant-coaching position for a season‚ with the potential of becoming head coach the following campaign.

The Kosovan Superleague ended two days ago‚ on Saturday‚ with FC Drita champions‚ and the club Clark will join will begin its preseason in the midst of the Premiership’s return on August 8 from the suspension of football due to the coronavirus pandemic.

“I didn’t want to leave Leopards. My every intention was to finish the season‚” Clark told TimesLIVE on Tuesday.

“There are a few tasty fixtures we have in the last six games that personally I wanted to be involved in against especially one of my previous employers [AmaZulu] where I feel like I had something to prove because they didn’t really give me an opportunity [as assistant-coach].

Black Leopards coach Alan Clark has resigned just under two weeks from a return to football in the Premier Soccer League (PSL).
Sport
1 year ago

“And from all that’s been going on at Leopards I fancied our chances of surviving.

"Not only that but Leopards gave me a fantastic opportunity and I wanted to see it through for them.

“I was waiting for the PSL decision [on Monday] because there were indications it might be cancelled‚ or it might have carried on.

"If the league was stopped at least I could have left Leopards knowing everything would be OK.

“But the situation in Europe is they’ve finished their leagues and they’re preparing for their new seasons already.

“The club that I am joining just missed out on Europa League qualification last season. And that’s what I want to do. As a South African we don’t get these opportunities very often.

“And do I turn it down and whatever happens in these next six games maybe I lose my job and then I’ve lost that opportunity as well‚ or maybe I do well? But South African coaches have never gone to Europe.

“I have coached with a national [Under-21] team in Kosovo. So I want an opportunity to work in the club football there‚ and perhaps in the Europa League or Champions League.

“I feel like I have the ability to do it and that as South Africans we don’t have to be scared. I want to test myself.

“They’re going to start their preseason in August. So they’re quite eager for me to get there.

“They’ve also had to be patient because there are no commercial flights out of South Africa‚ so you have apply to be on repatriation flight firstly.”

Clark’s association with Kosovo comes from working as a “technical advisor” to their national U-17 and U-21 teams soon after the fledgling country declared independence from Serbia in 2008.

“The current head coach of the club I’m joining and his brothers are the presidents‚ but he wants to move aside.

"So I would work with him the first season‚ and take over as coach the next season‚” Clark said.

“I couldn’t leave Leopards in the coming period of matches from August‚ and wanted to give them as much notice as I could.”

Morgan Shivambu and Mongezi Bobe were assisting Clark at Leopards and may be appointed caretakers after his sudden departure.

He had assisted Johnson at Platinum Stars‚ AmaZulu‚ and then Leopards.

Black Leopards coach Alan Clark is determined to save the troubled club from the ignominy of relegation and working around the clock to get the team ...
Sport
1 year ago

Combustible Belgian coach Luc Eymael has once again courted controversy after he was fired with immediate effect by Tanzania Premier League side ...
Sport
1 year ago