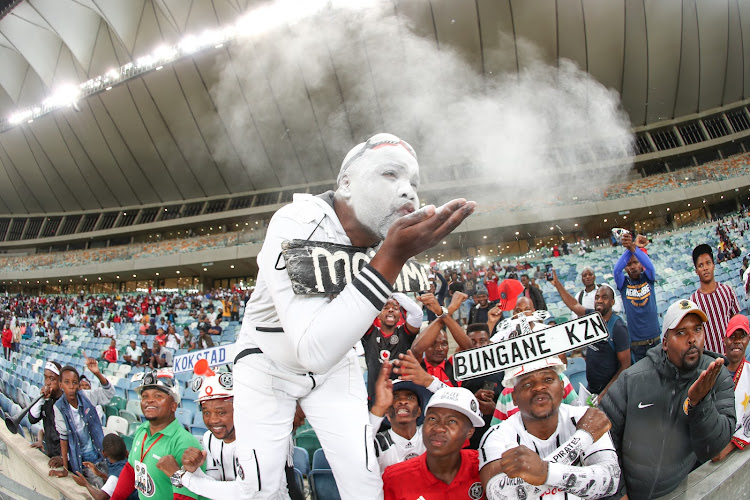 Twitter has been flooded with condolence messages to his family, and fans' memories of Sindane.

Mgijimi, who will be remembered for his commentary on Orlando Pirates games, his white overall and white face paint, died in eMalahleni in Mpumalanga.

Pirates’ secretary of the supporters branch for eMalahleni‚ Puleng Semela, told TimesLIVE that Sindane's father said he was found in his home at around 11am on Tuesday.

The cause of his death is not known.

“Once. Always. The club is saddened to learn of the passing of one of its staunchest and most active supporters, Mandla Sindane. Rest in peace Mgijimi,” was written on the Orlando Pirates Twitter page.

Here's a trip down memory lane of some of Mgijimi's moments on the field:

On his white powder

In a video shared on his Twitter account, Mgijimi explained the significance of his infamous white powder. “I never leave the house without that powder and before each game I pray for it and ask God to help us win.”

I ALWAYS PRAY FOR MY WHITE MAGIC POWDER

The Covid-19 pandemic saw all sporting activities and matches halted to curb the spread of the coronavirus. Mgijimi recently shared a video saying he misses being on the field.

In a separate video shared on Facebook, he committed his support to the team even during the pandemic and lockdown: “In times of Covid-19, once a Pirate, always a Pirate means that I will keep on supporting my football club, sitting here at home.”

Singing with other supporters ahead of a game

He loved his football so much...He dearly loved his @orlandopirates with all his heart and would travel countrywide to watch his beloved team!!

It won't be the same skhokho!! It wont!!

Gauteng Sport, Arts, Culture & Recreation has learnt of the passing of the charismatic @orlandopirates supporter & member of the National Football Supporters Association, Mandla "Mgijimi" Sindane. We relay our condolences to the Sindane family and fans.#RIPMgijimi pic.twitter.com/Ib7zxkucZc

Orlando Pirates' games will never be the same again💔😭 You served your team beautifully, your absence will surely be felt. May you rest peacefully & may your family find strength during these hard times.🙉 #Asphelelanga 😩 #RIPMgijimi pic.twitter.com/b2mqzq5M5o

Just when the PSL is returning, we learn of the sad news of the passing of Mandla MGIJIMI Sindane.

My condolences to the Sindane family and fans. Mgijimi will be greatly missed.

A true diehard fan of the beautiful game. In good and in bad times he would always be there. Front seat. Supporting Orlando Pirates. #RIPmgijimi 🤍🖤⚽️🙏🏽 pic.twitter.com/phWZ97UGTQ

Tjovitjo Mgijimi.
Thanks for dedicating your life to football. For being there for your club through dark and brighter days. You've been a true Buccaneer! Condolences to your family, Pirates fans and your friends. Rest In Peace Sandile 'Mgijimi' Sindane #RIPMgijimi pic.twitter.com/fzQxS5CFJS