'We have been patient at Kaizer Chiefs', says Amakhosi boss Motaung 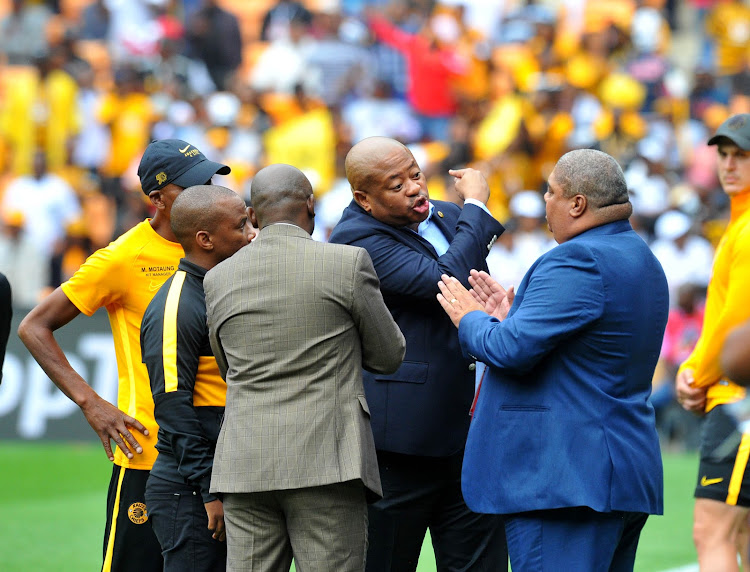 Bobby Motaung agitated in what looks to be a heated discussion between him and a match officia as the Kaizer Chiefs coaching and communications staff tries to calm him down during a Soweto derby match against arch rivals Orlando Pirates at FNB Stadium on February 29 2020.
Image: Sydney Mahlangu/BackpagePix

Absa Premiership leaders Kaizer Chiefs remained patient and never panicked even when it seemed there was a real prospect of the 2019-20 season being declared null and void, Amakhosi football manager Bobby Motaung has said.

Chiefs still have a long way to go sealing a title in their 50th anniversary season.

But Monday’s announcement by the Premier Soccer League (PSL) of an August 8 return to play at least removes the prospect of that challenge being ended without a ball kicked further in the season that was suspended on March 16 due to the coronavirus.

“Of course we are happy that we are returning,” Motaung told TimesLIVE.

“And obviously we have been preparing since we were allowed to start training. So we are all in full swing.”

The half-century birthday, and four unprecedented previous seasons without silverware had already cranked up the pressure on a squad who ended a disastrous ninth in the league in 2018-19.

Last week reports were that the prospects of their unlikely title chase under journeyman coach Ernst Middendorp could be scuppered along with the PSL season.

“I think we knew that protocols were to be followed. And we have got sensible leadership in football that has been dealing with this matter,” Motaung said.

"We have always been patient and waiting for the right directions.

“So we were not really panicking as such. The players have been focused on the preparations. So it’s not like we have been poking our nose into the whole thing.”

Motaung said Chiefs have not put in place special measures to ensure they now clinch the league title in the closed-doors matches in the Gauteng bio-safe environment (BSE).

“From where we ended up [in March] we will have to go and forge on.

"It’s just that obviously it might have an effect because we stood four, five months without playing,” he said.

“But it’s not an excuse. We have to face whatever the challenge is out there. It’s the challenge that’s facing us – we have to go out and soldier on.”

No leading team in SA football history has had a sudden five-month break due to a global pandemic to contend with. It should be extremely disruptive.

On the other hand, Chiefs’ players have been sitting at home with just the league title to think of for months, and it could also serve as a timely motivation for a team who had allowed a commanding lead to slip when football was suspended.

Motaung was asked if Chiefs have brought in a sports psychologist since the return, given the exceptional circumstances.

“Those things were there in place before we started [the lockdown], in terms of how we help the players off the field,” he said.

“It’s been part of the process.”

The weekend of August 8 sees football return with the Nedbank Cup semifinals.

The rest of the teams enter the BSE on August 11, with the official kickoff date of the Premiership likely to be the weekend of August 15.

Chiefs have a four-point lead over second-placed defending champions Mamelodi Sundowns, who have a game in hand.