Ayanda Patosi on Benni McCarthy: 'At the beginning I was not a friend of his' 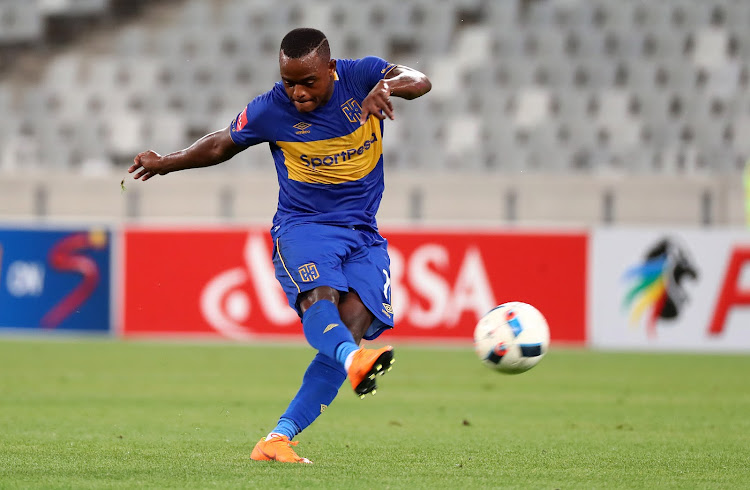 Benni McCarthy pushed Ayanda Patosi to be his best‚ and reminded him he was not on holiday at Cape Town City‚ the striker said of his time spent coached by Bafana Bafana's all-time top scorer.

Patosi‚ now on loan at Foolad in Iran‚ admitted that when he arrived at City roughly at the same time McCarthy was appointed coach the striker‚ after seven seasons for Lokeren in Belgium‚ thought the Premier Soccer League (PSL) would be something of a stroll.

He said working under a Cape footballing legend - McCarthy is the only South African to win the Uefa Champions League‚ with FC Porto in 2004 - helped get his head straight.

"He helped so many players a lot‚ especially the ones from Cape Town - players like Ebrahim Seedat also‚" Patosi told an online press conference of the SA Football Journalists Association.

"At the beginning I was not a friend of his‚ and I didn't work well with him.

"Before that I knew Benni from Belgium when he was an assistant-coach there [for St-Truiden]. So we came together at Cape Town City‚ and I thought everything would be fine‚ and on my side I also thought the PSL would be easy.

"So I didn't do as much as I should‚ I didn't work that much to give him the confidence that‚ 'OK‚ I have a player‚ I can trust that he's going to win games for me'.

"I did my own things on the side and started to not focus on football‚ started being with friends.

"And I didn't realise Benni was doing all these things to help me in the end to become a better player.

"At some point I went to the Eastern Cape‚ and I thought about it and came back and spoke to him‚ and to Mr John [Comitis‚ City's owner].

"I realised Benni wanted the best out of me‚ and that I was not in Cape Town for holidays‚ but to work.

"I realised I cannot do just what I want and expect to perform. I started doing my job‚ worked hard‚ and at the end we worked fine.

"And I think for Cape Town City‚ we played two finals. And for a new coach to play a final and lose in his first season‚ and in his second to take the cup‚ was a great achievement for him.

"He's a coach who doesn't give a sh*t if you are a star‚ or a big player or anything. He treats everyone in the dressing room the same.

"And if you're making wrong things he's going to tell you sh*t. Everyone in the dressing room.

"So we knew that off the field he's nice - top guy‚ top person. But when we get to the dressing room it's a different story.

"It doesn't matter if you are Ayanda Patosi‚ or Teko Modise - if a young player comes and works hard Benni doesn't care‚ he will put that player and put you on the bench.

"It was one of the things that pushed the guys. And I think it worked for us."

McCarthy reached the MTN8 final‚ losing against SuperSport‚ in his first season as a head coach in 2017-18‚ and steered City to victory against the same team in the following season's final.

City finished fifth and fourth in the Absa Premiership but McCarthy was fired in November after a run of 18 matches without a win.

The Nedbank Cup semifinal between Baroka FC and Bloemfontein Celtic will be the match that kicks off the return of professional football on Saturday ...
Sport
10 months ago

SuperSport will be 70 to 80 percent fit‚ says Kaitano Tembo

SuperSport United coach Kaitano Tembo says the majority of his players will be about 70 to 80 percent match fit for their first match of the restart ...
Sport
10 months ago

Sundowns coach Pitso Mosimane not taking anything for granted

Pitso Mosimane has warned against the idea that Mamelodi Sundowns will easily run over all the teams they will play in the Nedbank Cup and nine ...
Sport
10 months ago