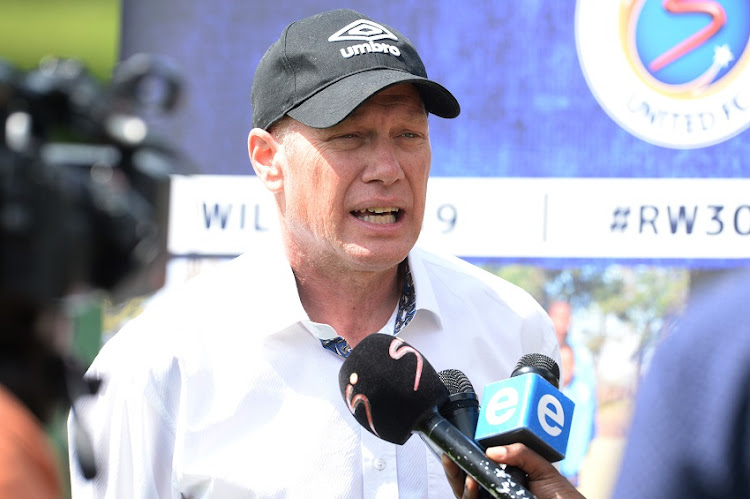 SuperSport United CEO Stan Matthews has given a detailed breakdown of why the club would be willing to sell utility player Aubrey Modiba and striker Bradley Grobler.

Matthews said the sale of the two players would form part of SuperSport balancing their books financially amidst the impact of Covid-19 on football clubs.

As to why those two in particular? That would be a mixture of high demand – Sundowns have made a “very good offer” for Modiba‚ and reported Orlando Pirates target Grobler is second-top scorer in the Absa Premiership – and the fact that they are not among the players SuperSport simply cannot sell‚ Matthews explained.

“To be clear I don’t want to sell any players. My board knows I’m particularly painful in rather not wanting to bring players in‚ and not let players go‚” Matthews told an inline press conference of the SA Football Journalists Association.

“But the reality of the situation is that you are going to have to let players go.

“In that situation you have to look at your squad and say‚ ‘Where will I feel the least pain from a perspective of continuity or depth?’

“For example I could sell Ronwen Williams‚ but is that what I want to do? How can I replace my captain? You look at those situations and say those players are not for sale. And we have a few of those in the club at the moment.

“Certainly the big trio [Teboho Mokoena‚ Sipho Mbule and Jamie Webber] who we want to release to a club in Europe.

While most clubs will be splashing out on reinforcements during the off-season‚ SuperSport United coach Kaitano Tembo will look internally and build ...
Sport
1 year ago

“ … So when you narrow down what kind of players you can sell‚ to be fair it’s going to come down to Aubrey Modiba – he’s the one linked with the most moves all the time‚ who Sundowns have been pursuing‚ who’s been with us for a good period‚ has given us good service and trophies.

“I already have at wing Kudakwashe Mahachi and Evans Rusike on one side‚ and Guily Manziba and Ghampani Lungu on the other.

“And I had geared up to sell Aubrey‚ to be blunt. I brought Manziba in because I was anticipating that Aubrey was going to be sold the first time around. When that deal fell through I was over-resourced – I let Thabo Mnyamane and Thabo Qalinge go.

“If I look where my club is not strong it’s in central midfield‚ for a Dean Furman just to disappear. And if Mokoena gets injured our next is a youngster‚ Jesse Donn‚ 20 years old.

“There are certain positions where I can’t compromise – like central midfield and striker. I’ve brought Iqraam Rayners at striker for next season and hopefully that will help.

“But in the wide areas we’re quite well stocked so hopefully Aubrey will be the player we will be looking to make a big sale on in the next transfer window.

“Then it comes down to whether Bradley wants to see it out at SuperSport‚ or wants‚ at his age‚ one last stab at a big club.

“ … He’s got a situation where we’ve offered him something until the end of his career‚ and in fact potentially beyond it. In fact‚ certainly I’ve offered him a potential coaching spot.

“At the same time money is money now‚ and if Bradley gets offered something‚ I don’t think anybody at SuperSport would be saying‚ ‘We expect you to serve out the rest of your career here’‚ where he could earn maybe double elsewhere in the twilight of his career.

“So for Bradley it wouldn’t just be about the offer‚ but also finding the right replacement‚ be that in the market or as part of a swap deal.”

Grobler (32) has 12 goals in the Premiership‚ two less than top scorer Gabadinho Mhango of Pirates. Modiba‚ still only 25‚ is completing his fourth strong season at SuperSport.

Fourth-placed Matsatsantsa return to football from the Premiership’s Covid-19 suspension against ninth-placed Bloemfontein Celtic at Bidvest Stadium on Sunday.