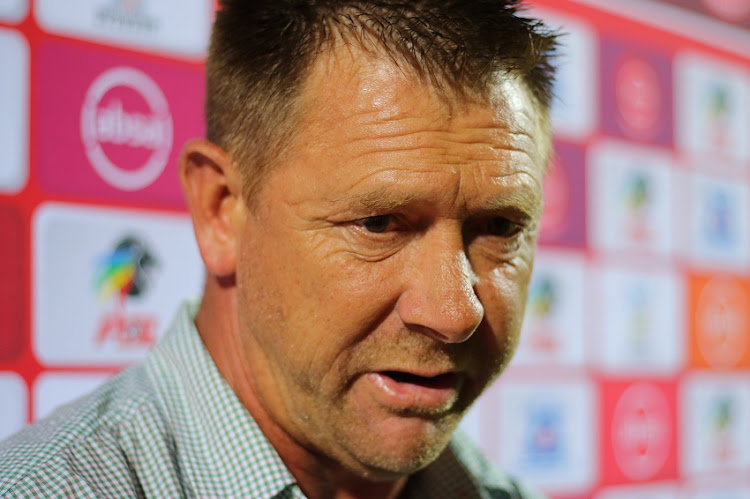 Maritzburg United coach Eric Tinkler is targeting one more Premiership win from their remaining four matches to cement a place in the top eight.

Maritzburg reached the 40-point mark with a deserved 2-2 draw with Mamelodi Sundowns in Atteridgeville on Friday night where they twice came from a goal down.

“If somebody offered me 40 points at the beginning of the season I would have taken it‚ and I would have asked how much to pay for it to be honest‚” said the former Bafana Bafana midfield strongman.

“We are very proud of the players and what we have achieved at the club so far this season. Getting to the 40-point mark is a fantastic achievement considering where we found ourselves at this stage last season.

“But we still have four games to go and we want to ensure that we secure the top eight position. I think one more result will guarantee top eight for next season.”

Tinkler said getting three more points will make it difficult for the teams below Maritzburg – Cape Town City‚ Highlands Park‚ Stellenbosch FC and Golden Arrows – to overtake the KwaZulu-Natal team.

“Teams that are below us have four games left and will have to accumulate eight points to go past us‚ which is two points per game and it is going to be a tough ask for them.

“But we are mindful that it is possible for them to do that mathematically and for me it is to get another win. If we get another win we guarantee a place in the top eight but ideally we want to win all the remaining matches and see where we will finish.”

Tinkler said his team did well to come back from a goal down twice to share the spoils against Sundowns.

“We always knew this was going to be a tough game. I wasn’t happy with the performance of our first game against Leopards on Sunday and I was possibly harsh on my players but our expectations are high.

“The performance that we put up against Leopards was not good enough but you have to take into consideration that four months is a long time to be out of the game.

“We were slightly better against Sundowns. This is only our second game back and you could see more fluidity in Sundowns’ game due to the fact that they have already played five.

“In the first half they were better than us‚ we played with a little bit of fear and we invited pressure and with that pressure they managed to score the first goal. We got the equaliser but it was from a corner‚ but I thought we only came back in the second half.”