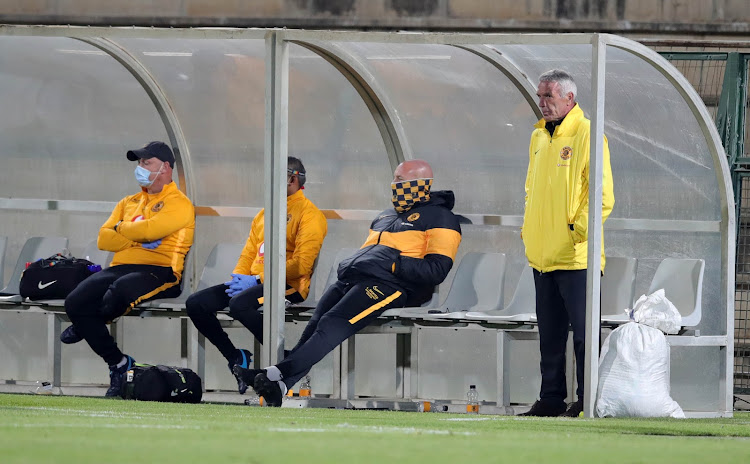 Ernst Middendorp says it is a trend worldwide that team rely heavily on set-pieces for goals.
Image: Samuel Shivambu/BackpagePix

Absa Premiership leaders Amakhosi‚ who meet Stellenbosch FC at Orlando Stadium on Sunday (kickoff 6pm)‚ have at times appeared to struggle for winning results due to a seeming lack of further dimensions to their fearsome set-piece scoring capability.

Chiefs suffered a setback to their title ambitions being overwhelmed 3-1 by Bloemfontein Celtic at Tuks Stadium on Wednesday night.

In that game‚ normal delivery specialist Lebogang Manyama did not take the set-pieces‚ and Middendorp said the midfielder‚ substituted off from the break‚ had carried an injury into the match.

Manyama is not available for Chiefs against Stellenbosch.

"Actually it's a way to score. It's a dimension. And in soccer at the moment a dimension that there is for every soccer team worldwide‚" Middendorp responded asked about Chiefs' reliance on the set piece‚ pointing to Sunday's Uefa Champions League finalists - Bayern Munich and Paris St-Germain - as examples.

"You have seen lately in Champions League games where a huge number of goals are scored with corner kicks‚ free-kicks.

"I can refer to the two finalists - more than 50 percent of their goals are scored in this way.

"Of course we had several moments [against Celtic] inside the box‚ around 16‚ 14‚ 15 metres‚ where the players really didn't show any composure‚ not taking the second touch that was possible‚ blasting balls into the second row.

"This is definitely not as good as we would like to see.

"On the other side our ball circulation and build-up was also definitely not like expected‚ like we are capable of.

"OK‚ that's a summary of the game‚ and we will deal with it‚ analysing with our performance analysts what we have seen‚ what we must do better‚ and as soon as possible looking forward preparing ourselves for the next game on Sunday against Stellenbosch."

Chiefs (52 points from 25 games) have a five-point lead over second-placed defending champions Mamelodi Sundowns (47 from 25)‚ who meet Lamontville Golden Arrows at Dobsonville Stadium on Monday.

Fans are the fuel that fire up the beautiful game.
Sport
1 year ago

Kaizer Chiefs coach Ernst Middendorp: 'Daniel Akpeyi will be the No.1 for the rest of the season'

Daniel Akpeyi will be the No.1 goalkeeper at Kaizer Chiefs "for the rest of the season"‚ coach Ernst Middendorp has pronounced in a bold statement ...
Sport
1 year ago