'If you don’t want to be criticised‚ don’t be a coach': Pitso Mosimane as pressure mounts 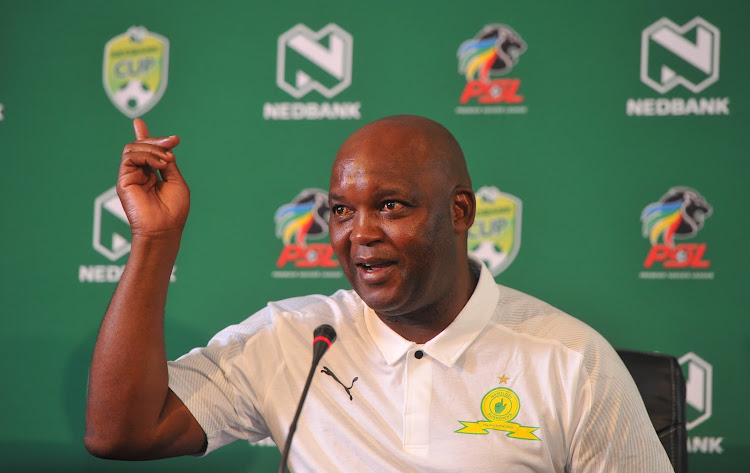 As pressure mounts on Mamelodi Sundowns in their attempt to defend the league title and shrug off a challenge from long-time leaders Kaizer Chiefs‚ coach Pitso Mosimane has called on his players to soak it up and give their all in the remaining two matches.

Sundowns missed a glorious opportunity to open a three-point gap at the top of the Absa Premiership after a 1-0 defeat to Baroka FC ensured that they failed to capitalise on leaders Chiefs' loss in the earlier match on a dramatic Sunday.

The defending champions have an inferior goal difference to leaders Chiefs and will now have to outscore Ernst Middendorp’s side by five clear goals in their remaining matches.

Sundowns face off against bottom club Polokwane City on Wednesday and then take on another relegation-threatened Limpopo side Black Leopards on the final day on Saturday.

“As coaches we are paid to be professionals and we are trained to take the pressure that comes with it.

“There is always pressure‚ there are always expectations and everybody has got an opinion‚” said Mosimane.

“Professionals must play with the pressure. In fact‚ they must enjoy the pressure and thrive under pressure.”

Sundowns showed signs of cracking against Baroka when pitted against a resolute defence and will on Wednesday have to be more creative‚ clinical and innovative when they face a Clinton Larsen-coached City side that can beat any Premiership opponent on their day despite propping up the table with two matches remaining.

The Sundowns players went into the clash against Baroka in Dobsonville well aware that Chiefs were beaten 1-0 by Bidvest Wits earlier in the day.

While the pressure of knowing the result from the Chiefs match may have weighed heavily on their minds‚ Mosimane did not want to use this as an excuse.

“No no no‚ we are going with this thing (title chase) until it ends‚ it does not matter‚” Mosimane added.

Sundowns are still on course for a treble as they can add the league title and the Nedbank Cup to the Telkom Knockout they secured earlier this season.

“I come out stronger under very high criticism and I like to look back and say to whoever who said these can never happen or we can’t make it and say‚ you look at us now.

Chiefs coach Middendorp struggled to take in the defeat against Wits and was so devastated that he allegedly did not show up for the mandatory post-match interview with the media.

“You know behind us in an institute‚ it is everybody‚ it is our families‚it is our support system that gets disappointed and we as coaches we have to take the blame as much as we take the credit.

“As you said coach Middendorp did not even go to his post match interview. It’s frustration. We are human beings and expectations are high. It’s madness.

“We can say it is the beauty of football but it is frustrations to us as coaches. But we don’t want to make excuses. Last two games we go for it and we fight for it.”

Premiership champions Mamelodi Sundowns and German sportswear company Puma gave fans a peek into the club's new colours for the coming campaign after ...
Sport
1 year ago

It is a trust that has approached the Premier Soccer League (PSL) to purchase the Premiership franchise of Bidvest Wits, and not Tshakhuma Tsha ...
Sport
1 year ago

Amakhosi fans are disappointed with their team's 1-0 loss to Bidvest Wits on Sunday, but hope is not lost for the leaders of the Absa Premiership log.
Sport
1 year ago