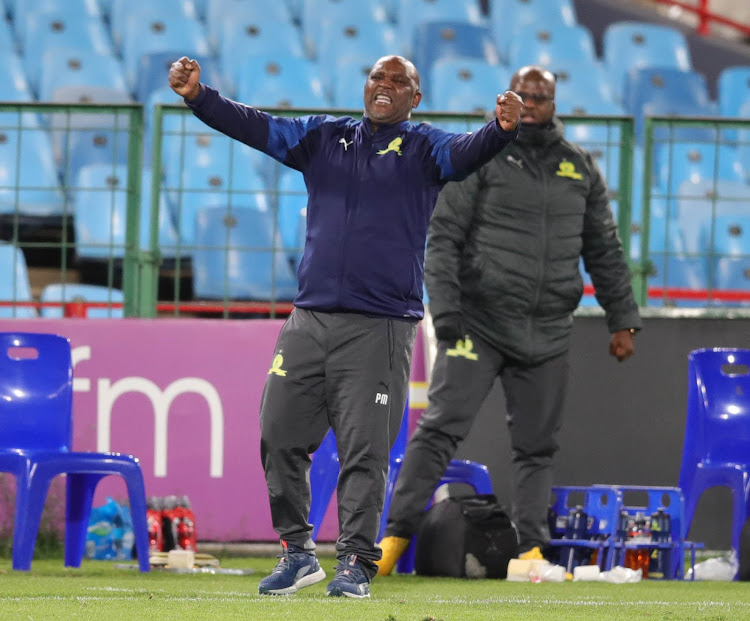 Pitso Mosimane is on course for a maiden domestic trebble.
Image: Samuel Shivambu/BackpagePix

Pitso Mosimane's place among the greats was never in doubt but in case there were still any skeptics in the room, he stepped things up a notch on Saturday and added another chapter to an impressive book of milestones that will be read for generations to come.

Jingles, as Mosimane is known, led Sundowns to a tenth league title since the inception of the Premier Soccer League in 1996 and in a personal milestone for the overachieving coach, it was his fifth championship in the seven years he has been at the helm at Chloorkop.

It is an incredible record for a coach who has developed an impressive knack of beating seemingly insurmountable odds and proving the doubters wrong.

That he managed to pip rivals Kaizer Chiefs to the title on the final day of the season on Saturday while avoiding well-sharpened knives, some from inside his beloved Chloorkop home, is testament to his incredible street smarts, savvy, talent and Himalayan resilience.

He revealed at the weekend that the list of those who hope to see him fall is very long and it includes people who continue to draw salaries at Chloorkop while plotting the demise of the same employer in the shadows.

We can say anything we want about Pitso Mosimane, but there's no denying that the man is a living legend.

The doubters have seemingly forgotten that Sundowns were languishing at the bottom end of the log when Mosimane replaced Dutchman Johan Neeskens in December 2012.

Dr. Pitso Mosimane deserves a Lifetime Achievement Award, period!! He also deserves the "Dr" title for the same reasons the likes of Mme Rebecca Malope, Rre Ivin Khoza and others got it.
HE DOESN'T HAVE TO DIE FIRST TO BE RIGHTFULLY RECOGNIZED AND HONOURED.#DR_PITSO https://t.co/7INBi6CTQm

But since the lowly depths of that season, the Brazilians have either won the league or finished runners-up every single year.

Mosimane has now led Sundowns to 10  trophies in the years he’s been at the helm and won the Caf Champions League, the Caf Super Cup, five domestic  league titles, two Telkom Knockout trophies and the Nedbank Cup.

He has a chance to add an 11th trophy this week, and complete a rare domestic treble, as Sundowns are in the final of the Nedbank Cup and face Bloemfontein Celtic.

Unedited footage of Pitso Mosimane vanquishing all pretenders who have been getting help from 3rd forces to the league title... class in deed is permanent broer. pic.twitter.com/bSFxfNcSwX

Mamelodi Sundowns celebrated a tenth league title on Saturday but coach Pitso Mosimane had other things on his mind as he launched a scathing attack ...
Sport
9 months ago

Kaizer Chiefs coach Ernst Middendorp did not have an explanation for why his players “stepped back” after he had asked them to push for a second goal ...
Sport
9 months ago

Staunch fan Rebecca Malope after Chiefs capitulated on the final day: 'I must stick to what I'm good at'

Award-winning gospel star Dr Rebecca Malope says her children warned her that the battle for the league title between Kaizer Chiefs and Mamelodi ...
Sport
9 months ago