End of an era: Ajax Cape Town are no more 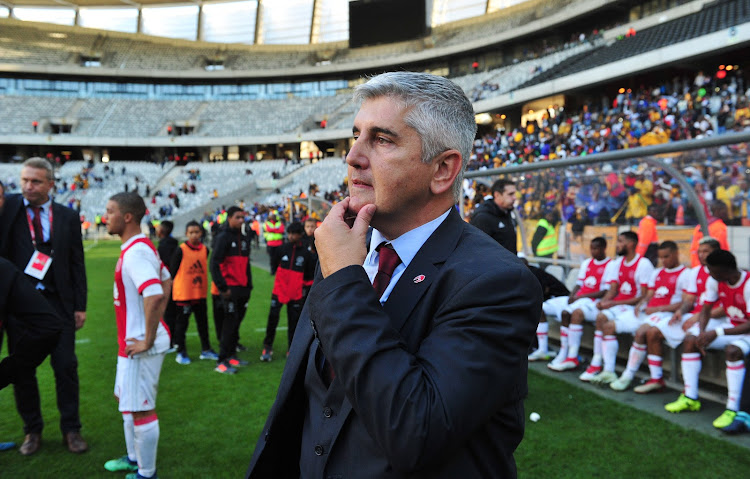 Ari Efstathiou could not be reached for comment.
Image: Ryan Wilkisky/BackpagePix

Ajax Amsterdam have sold their 51 percent share of Ajax Cape Town to the 49 percent shareholder‚ Cape Town Stars‚ bringing to an end a 21-year joint ownership of the club.

This follows Ajax Cape Town's failure for a second season running to win promotion back to the Premiership from the GladAfrica Championship (First Division).

Ajax Amsterdam‚ who had long been known to be dissatisfied with progress at their Cape satellite‚ said in a statement that the sale comes after “the South African football market has not produced enough talent at the level that Ajax strives for.”

Ajax Cape Town announced in a statement on Monday evening: “Cape Town Stars‚ the minority shareholder of Ajax Cape Town‚ has reached an agreement to take control of the franchise.

“Cape Town Stars‚ the 49 percent shareholder of Ajax Cape Town‚ is pleased to announce that they have reached an agreement to acquire the 51% share of the GladAfrica Championship franchise from Ajax Amsterdam with effect from October 1.

The Dutch parent club said in their own statement that Ajax Amsterdam will shift their focus to other markets.

“AFC Ajax NV has reached an agreement for the sale of 51% of its shares in Ajax Cape Town to the minority shareholders.

"The transaction is set to be completed on or before October 1‚” the Ajax Amsterdam statement read.

“After the strategic reorientation‚ which was reported in February 2020 during the presentation of the half-year figures‚ Ajax concluded that the ambitions and results in Amsterdam are in too great a contrast to the development of the football market in South Africa.

“Ajax has expressed the ambition to reach the top of European football and in recent years the South African football market has not produced enough talent at the level that Ajax strives for.

"Moreover‚ Ajax does not see sufficient potential for the future.

“The club has shifted its focus to other markets. Ajax Amsterdam has been a 51% shareholder of Ajax Cape Town since 1999.”

Comitis‚ now owner of Cape Town City‚ was ousted in a much-documented power struggle for control of the club with brother-in-law Ari Efstathiou‚ via prolonged court battles‚ in 2013.

Ajax Cape Town chairman Ari Efstathiou could not be reached for comment.

Everton manager Carlo Ancelotti is confident Theo Walcott will not leave the club in the transfer window after omitting the English winger from the ...
Sport
1 year ago

In many countries‚ the award of Footballer of the Season by the football journalists association is much sought-after and prestigious.
Sport
1 year ago