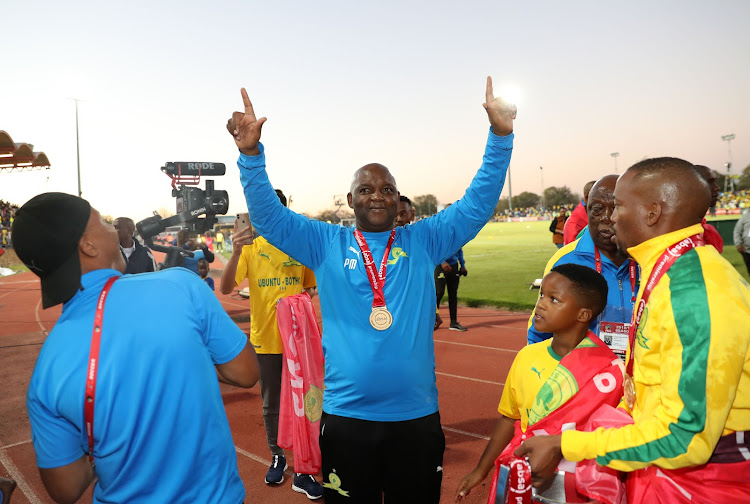 Former Mamelodi Sundowns coach Pitso Mosimane‚ who resigned in a bombshell announcement on Wednesday‚ has posted a live video on Instagram of himself and his family leaving to join his new international club‚ believed to be Al Ahly.

Mosimane said: "It has been difficult. It's an emotional stage. I have been humbled by Sundowns suporters. We will always love them. But ja‚ what can I say? Ja. That's it."

The video showed Mosimane and his family checking in their luggage for an international flight at OR Tambo International Airport on Thursday.

Ahly and Mosimane are yet to confirm the Egyptian giants – Africa’s most successful club – as his next club.

Mosimane’as resignation at Sundowns came as a shock‚ just weeks after winning a treble‚ including the Premiership‚ with the Brazilians in 2019-20‚ and months after announcing a new three-year contract at the Pretoria giants in a televised press conference with Motsepe in May.

A beautiful tribute to #masandawana @sundownsfc sharing love and appreciation for the supporters, the journey and the beautiful Nation of South Africa. Farewell Coach @therealpitsomosimane we wish you and your family nothing but the best, you are in our prayers and we will forever be greatful. Tsela Tshoeu #Godisgood #farewell #youareloved #youatecherished #celebrated #supported #pitsomosimane #mzanzicollegechallenge #football #mzanzicollegefootball #collegesports #champion #southAfrica #Africa #blackchilditspossible #blackexcellence #king #diski

A post shared by Mzanzi College Challenge (@mzanzicollegechallenge) on Oct 1, 2020 at 3:15am PDT

Mamelodi Sundowns president Patrice Motsepe has accepted the resignation of outgoing coach Pitso Mosimane‚ who is reported to be joining Egyptian ...
Sport
1 year ago

Pitso Mosimane has released a statement confirming his resignation from Mamelodi Sundowns to "join an international club".
Sport
1 year ago

‘A well-rested team’: 10 Pitso Mosimane quotable quotes that will make you cry

Former Mamelodi Sundowns coach Pitso Mosimane is not just one of the most decorated coaches on the continent‚ but he is also a colourful provider of ...
Sport
1 year ago