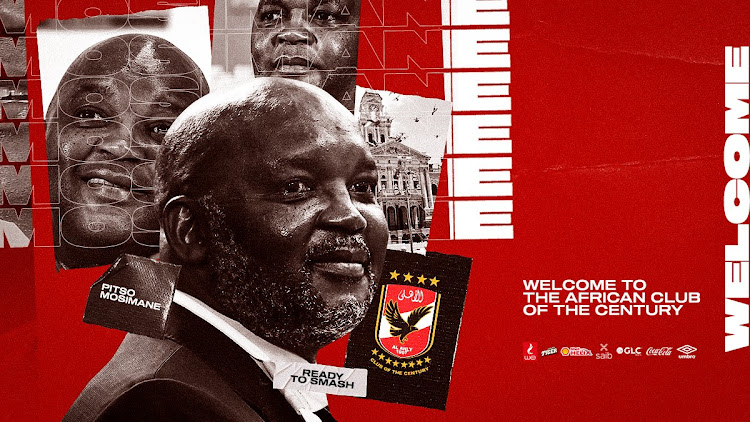 Mamelodi Sundowns coach Pitso Mosimane has explained that an opportunity to coach Africa’s most successful club at Al Ahly is like being asked to join Real Madrid or Barcelona in Europe.

Mosimane’s decision to leave Mamelodi Sundowns and join Al Ahly this week came as a bombshell in South African football. The coach and his family left on Thursday and he will be announced the new Ahly coach in Cairo on Friday.

In a YouTube interview the evening before the coach left with Shoot Online and their senior reporter Matshelane Mamabolo – the freelance journalist who broke the story on TimesLIVE on Wednesday – Mosimane explained his decision.

Asked about signing a new contract at Sundowns in May‚ then joining Ahly months later‚ Mosimane said: “You must know my contract starts – you know corona threw everybody off – and my contract should be starting next season.

“But because of corona then things are overlapping. And the contract was then part of that overlapping where you would say‚ had this opportunity of Al Ahly come if corona was not there then that opportunity would be before the contract being renewed.

“But it was not the case. So you do what you have to do. And you want to stay‚ because I wanted to stay‚ of course. And I’ve always said it‚ before I signed my contract‚ that I wanted to stay. You must stay where you are loved.

“But football as it is‚ things change. And this opportunity came. And unfortunately the opportunity comes after the contract had been signed.

“Yes‚ there were opportunities of the same team and other teams before‚ to be honest‚ but it was not concrete as it was this year.

“This one‚ when people say we are sending you the contract if you are happy with it‚ it’s a totally different story to say‚ ‘You know I’ve been sent by the team‚ I’ve been given a mandate by the team to talk to you’. You know those things‚ you never take them too serious because anybody can say anything.

“But ja‚ you sign a contract and an opportunity comes and you feel that it’s a big opportunity in terms of the profile of the team‚ in terms of you as a coach who has never come out of the borders.

“And you need to come out of your comfort zone. And also saying to yourself‚ ‘Look‚ you need also to show our local coaches that it is possible that one of us can go to coach in the big league in the continent’.

“I mean this is like coaching Madrid or Barca in Europe. It’s like coaching Flamengo or Santos or River Plate or Boca Juniors in South America. It is as huge as that.

“So you say to yourself‚ ‘Let me go there’. Of course you know the risks are big in those big clubs and if you also look at the record of the teams‚ then you won’t be easily going because you will say‚ ‘Hey‚ coaches don’t last in that space’.

“But I could say the same thing when I came to Mamelodi Sundowns. The lifespan of a coach was not even more than a year.

“And I said to myself‚ ‘Do you want to go to that environment?’ But look what came out. Almost eight years came out.”

Mosimane wrapped up a treble weeks ago for Sundowns – including his fifth league title at the Brazilians‚ and the club’s 10th.