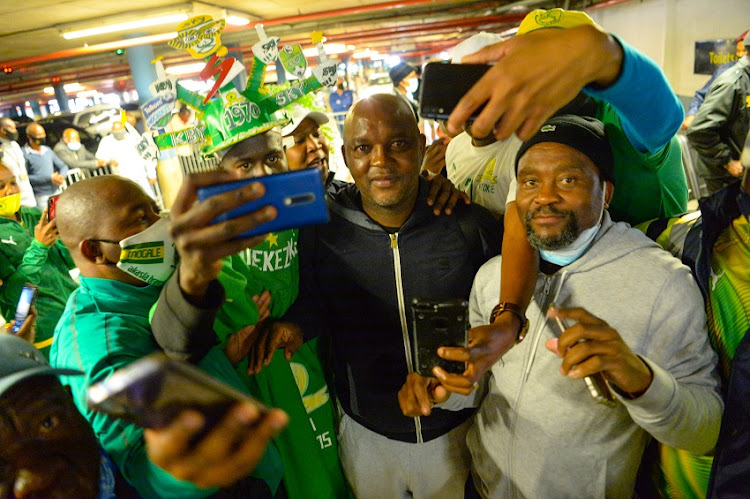 Pitso Mosimane has admitted the timing of the approach from Al Ahly to join the Egyptian giants caught him off guard since Swiss incumbent Rene Weiler had won that country’s league with games to spare‚ and reached the Caf Champions League semifinals.

Mosimane’s bombshell departure from Mamelodi Sundowns and the Premier Soccer League – where he has set the bar with the all-conquering Brazilians in eight years at Downs – was not just a shock to the country. Mosimane also said of the approach from Ahly‚ that he “didn’t see it coming”.

The coach has said he was made a solid offer – believed to also be lucrative‚ and speculated on as worth R50-million a year.

Mosimane believes Weiler has a job lined up in Europe‚ and that Ahly made their choice based on the respect they have had for the former Bafana Bafana coach from his Caf Champions League exploits with Downs. These include winning the competition in 2016‚ and inflicting a huge 5-0 defeat on Al Ahly – their biggest in nearly 80 years – last year.

“This one I didn’t see it coming‚ I must tell you the truth‚” Mosimane admitted in an interview with YouTube channel Shoot Online.

“Do you know why? Because the coach [Weiler] is doing exceptionally well there. The coach won the league I think with seven games to go. I think they lost one or two matches until now.

“And then how do you see the [job]‚ you going in there? You should look at other places like [Patrice] Carteron has left Zamalek [and] … the coach of Wydad [Casablanca] is gone.

“Then‚ yes‚ then you’re saying maybe that’s where this thing is coming from. Not from a team that has already won the league and then there are a few games that they are playing like they are friendly games.

“And they [Ahly] are in the semifinals of the Champions League. I mean the coach has done well.

“We never saw that coming. But‚ as we say‚ this coronavirus is a tough thing. The coach’s contract ended‚ I’m told. And he’s not renewing his contract.

“And I believe that he’s got an opportunity to be in Europe‚ and he believes that he’s taking that opportunity.

“So I would say‚ [it was] luck. But it’s not luck because they didn’t go for anybody that they don’t know.

“So they’re saying they need somebody who knows the competition‚ which is the Champions League for them‚ and they believe they have a good team to win the [Egyptian] league.

“You know‚ I would presume that if I leave Mamelodi Sundowns they will want the guy who knows how to deal with Champions League.

“I’ve got my history with them. And the coach and I‚ we became sort of friends‚ talking and analysing the games and discussing.

“But they know me. We have played against them. They know I have an extensive knowledge of their team.”

Mosimane’s resignation at Sundowns came as a shock to the PSL and South Africa. He had wrapped up a treble – including his fifth league title‚ all at Sundowns – weeks ago‚ and announced a new contract in May.

He won eight trophies in 11 years at Downs‚ including the Champions league and Caf Super Cup. Downs’ Champions League record under Mosimane from 2016 was: final‚ quarterfinals‚ group stage‚ semifinals‚ quarterfinals.