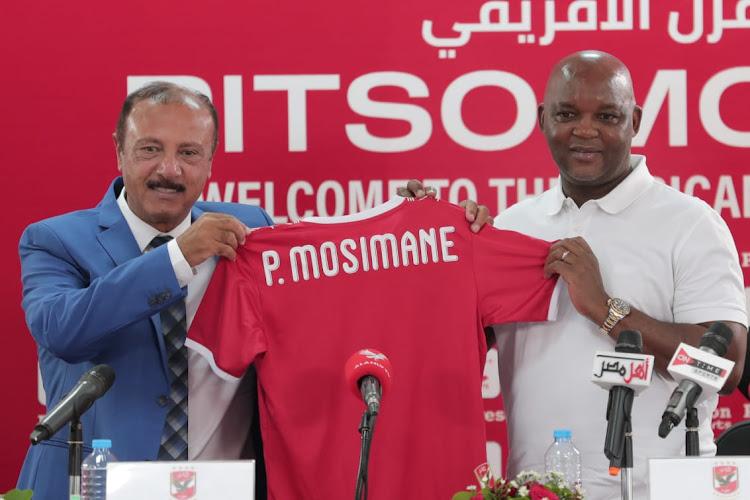 Mohsen Saleh, head of the football planning committee at Al Ahly, presents new coach Pitso Mosimane to the media in a press conference in Cairo on Saturday.
Image: Al Ahly/Twitter

Pitso Mosimane has faced his first press conference as the new coach of Al Ahly‚ saying he understands completely the magnitude of the job he has taken on at Africa’s most successful club.

Speaking eloquently‚ Mosimane said he understands the expectations and pressures he will be subjected to at the Egyptian giants.

“I just want to thank Captain [Mohsen] Saleh here as the head of the board‚ but first above the board I must thank Captain ‘Bibo’ [Al Ahly president Mahmoud El Khatib]‚” Mosimane said.

“They have entrusted me with the opportunity to lead and carry the Team of the Century‚ and I know how big the job is.

“I come here with the practical experience of having played against Al Ahly four times – two times in Cairo and two times in South Africa.

“And I had the practical experience of Ahly as a big club‚ I man the club of the century on the continent. And I have seen how big they are outside and inside Cairo and Egypt.

“Of course I can see familiar face here who I have interacted with before‚ amongst the journalists. And you have treated me very well‚ with respect‚ and I gave you the same respect back.

“I think that shows how big Ahly is. And Ahly is respected on the continent and is respected in South Africa.

“And I also have the correspondence of the president of Mamelodi Sundowns [Patrice] wishing me luck to come here. And the Sundowns supporters came to the airport to wish me luck sending me off to come here.

“Normally you would find the supporters angry that you are leaving them‚ especially after the success we had this year‚ which was one of the biggest seasons because we won three trophies in South Africa.

“So while we were celebrating I was leaving‚ which was not a good thing. But there’s a positive side – I’m coming tom Ahly‚ it’s a big club.”

“I’m humbled to be here. I was listening to Captain Saleh about my CV and why they chose me to be the coach of Ahly amongst all the big names from all the parts of the world.

“That is why I’m not taking for granted where I am – I know where I am.

“And I know the responsibilities of my work here. I know the pressures and the stresses. Because it’s not the first time I’m in Egypt – I’ve seen the pressures of playing Caf Champions League against Al Ahly and Zamalek.”

Mosimane’s most notable clash against Ahly was when Sundowns thrashed the Red Devils 5-0 – their biggest defeat in almost 80 years – in last year’s Champions League.

Ahly‚ the record eight-time winners of the competition‚ are desperate to record their first victory since beating Orlando Pirates in the 2013 final seven years ago as Mosimane steers them in this month’s semifinals against Wydad Casablanca.