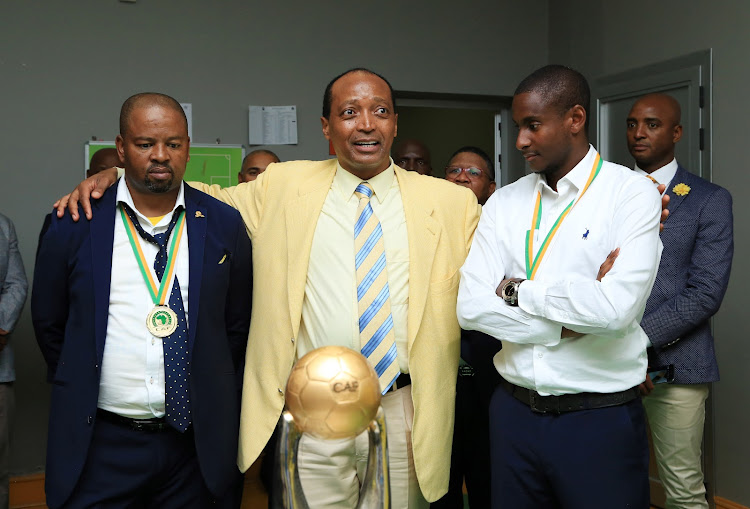 League champions Mamelodi Sundowns have shown faith in the existing members of their technical team and confirmed the appointment of Manqoba Mngqithi and Rulani Mokwena as joint coaches of the club on Sunday afternoon.

The duo replaced the extremely successful Pitso Mosimane who joined Egyptian powerhouses Al Ahly in one of the most dramatic career moves by a South African coach a few days ago.

The new joint coaches served as Mosimane's assistants at Sundowns and while they will have an equal say on technical matters‚ Sundowns have decided that Mnqithi will be given the privilege of making the final decision should there be an issue they cannot agree on.

Sundowns president Patrice Motsepe said the club was keen to keep the coaching seat local and decided to reward the two after they served the Pretoria side for many years.

“Manqoba and Rulani have been with Mamelodi Sundowns for many years and were part of the technical team that were crowned Champions of Africa in 2016‚ and have also won the (league title) and other titles in South Africa‚" Motsepe said on Sunday.

"The board of Mamelodi Sundowns was particularly keen to appoint South African coaches and express its commitment and confidence in the talent and ability of our local coaches."

Mosimane led Sundowns to a domestic treble last season - the league title‚ the Telkom TKO and the Nedbank Cup - and Motsepe said the duo have been given a mandate to defend the titles.

They will also be required to trade blows with the best on the continent and could run into Mosimane's Al Ahly in the coming months.

"Manqoba‚ Rulani and the technical team at Sundowns will focus on defending the PSL and the other titles that we won during our historic 50-year anniversary.

"They will also advance and continue with the objective that we stated in 2004‚ which is to make Mamelodi Sundowns one of the best clubs on the African continent.”

Sundowns are expected to make more announcements in the coming days ahead of the start of the new season later this month.

The Brazilians have been busy in the transfer during the off-season and Cape Town City striker Kermit Erasmus was the latest arrival to be confirmed on Sunday morning.

City announced that they had reached an agreement with the Pretoria side and the well-travelled Bafana Bafana star would pack his bags and head to the nation's capital.

Sundowns may have lost larger-than-life Mosimane to continental rivals Al Ahly but the Brazilians have already signalled that they will not give up their stranglehold on South African football very easily.

Erasmus was recently named in the Bafana squad that is to play two international friendly matches against Namibia and Zambia as preparation for the resumption of their Africa Cup of Nations qualifying campaign in November.

Erasmus is a top acquisition for the champions and his career has taken him to Dutch side Feyenoord‚ French clubs Rennes and Lens‚ OrlandoPirates and Supersport United among others.

Rulani Mokwena: ‘I am loyal and I am staying at Mamelodi Sundowns’

Mamelodi Sundowns assistant-coach Rulani Mokwena has stated “categorically” that he will not be following head coach Pitso Mosimane to Al Ahly.
Sport
1 year ago

Mamelodi Sundowns have announced the arrival Aubrey Modiba at Chloorkop on a five year deal.
Sport
1 year ago