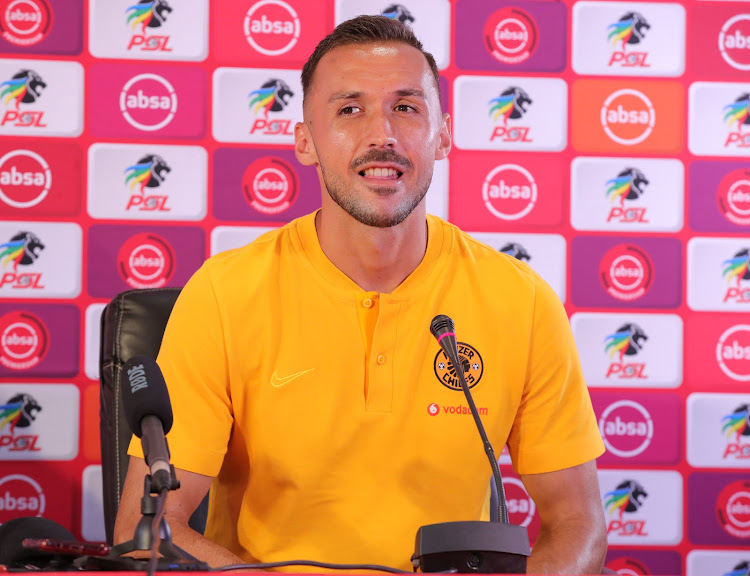 Samir Nurkovic has hit the ground running since joining Kaizer Chiefs at the beginning of the last season.
Image: Samuel Shivambu/BackpagePix

Kaizer Chiefs insist that they have not been approached by any club for the services of star striker Samir Nurković.

The Serbian‚ who finished with 14 goals in his first season in South African football in the recent campaign‚ has been the subject of furious speculation during the off-season.

The deadly goal-poacher has been linked with Egyptian powerhouses Al Ahly and a club in Saudi Arabia‚ among others.

Such has been the speculation that Chiefs felt the need to release a statement and dispute the reports on Tuesday afternoon‚ insisting that they have no intention of entertaining any potential suitors at this stage.

- no club has approached us to negotiate for his services.
- we can’t let go of our top striker at this stage.
- we are not flexible in the market while waiting for CAS outcome.#Amakhosi4Life pic.twitter.com/L6MbKb7zWt

The Naturena club are keen to hold onto their key players as they are still awaiting the outcome of the Fifa ban appeal case they lodged and was heard by the Court of Arbitration for Sport [CAS] on September 9.

"No club has approached us to negotiate for his services.

"We can’t let go of our top striker at this stage. We are not flexible in the market while waiting for CAS outcome‚" Chiefs said in a statement on Tuesday.

But insiders told TimesLIVE that while Chiefs are keen to hold onto the lethal Serb‚ the club may be willing to listen to a big money offer for his services.

A positive outcome in the CAS matter would suddenly change things as Nurković's fee would be enough to finance the signing of several players.

Chiefs were slapped with a two -window transfer ban in February 2020 by world governing body Fifa regarding the way they signed Madagascan player Andriamirado “Dax” Andrianarimanana.

Fifa imposed the ban on Chiefs after Amakhosi were found guilty of signing Dax in 2018 when the Madagascan already had a contract with Fosa Juniors in his home country.

They appealed the sanction and are now on tenterhooks as they await the outcome from CAS.

After an unhappy spell on the sidelines at Mamelodi Sundowns‚ Aubrey Ngoma has returned to Cape Town City.
Sport
1 year ago

Cavin Johnson has been announced as one of Pitso Mosimane’s assistants at Egyptian powerhouses Al-Ahly.
Sport
1 year ago