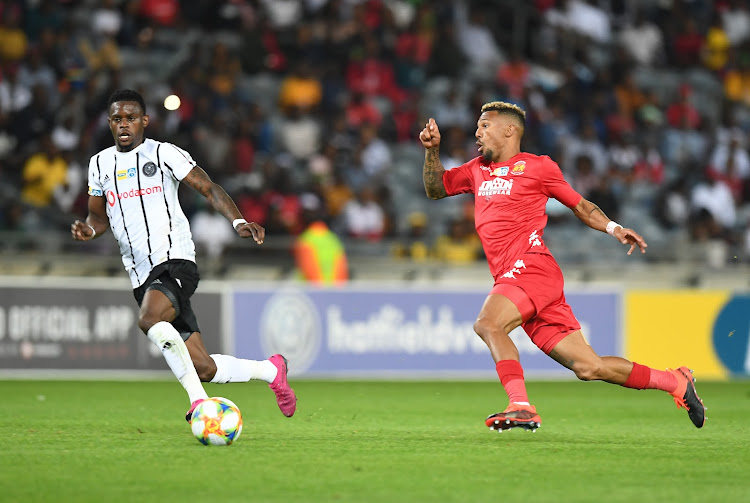 New Highlands Park midfielder Wayde Jooste (R) got off the bench to score the winning goal as send Orlando Pirates crashing out of the MTN8 earlier this season.
Image: Gallo Images

After dumping eight players on Tuesday‚ Orlando Pirates announced the signing of utility player Wayde Jooste from Highlands Park later in the day.

Jooste’s versatility may come in handy as even though he’s a right back‚ Pirates’ use of wingbacks on attack means that he could be pressed into service regularly.

The 27-year-old from Port Elizabeth has signed a three-year deal and was chuffed to have joined his favourite club.

"I am happy to have joined Orlando Pirates. This is an opportunity I look to grab with both hands.

"I know everybody says this is a dream come true but before I started playing professionally my father and I supported Orlando Pirates.

"Whenever we played against Pirates it felt special because I felt I was getting closer to my childhood dream‚” Jooste said in a statement issued by the club.

Jooste started out at Bloemfontein Celtic in the 2013/14 season before moving east to Durban where he joined Golden Arrows.

He then moved up-country to join Highlands Park.

After an unhappy spell on the sidelines at Mamelodi Sundowns‚ Aubrey Ngoma has returned to Cape Town City.
Sport
11 months ago

Scottish side Rangers have finally completed the signing of Bafana Bafana midfielder Bongani Zungu on a season-long loan deal from French club Amiens.
Sport
11 months ago

Cavin Johnson has been announced as one of Pitso Mosimane’s assistants at Egyptian powerhouses Al-Ahly.
Sport
11 months ago