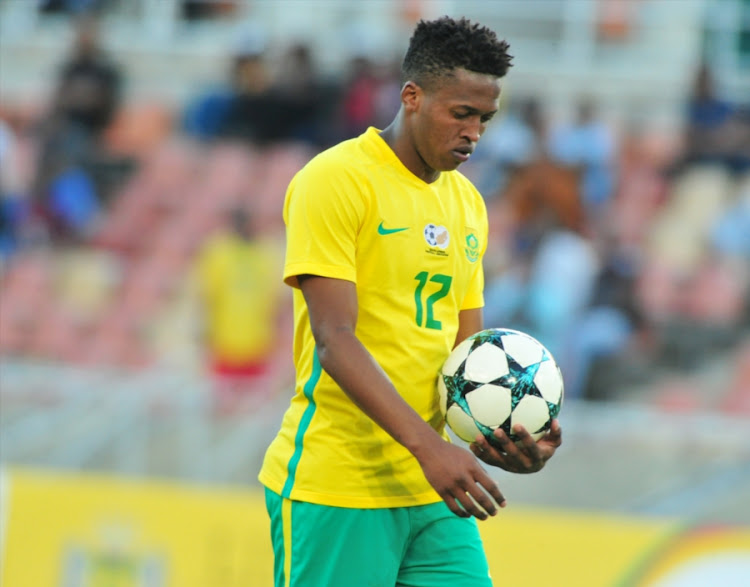 Luther Singh has only played one match for Bafana Bafana since his debut in 2017.
Image: Philip Maeta

Luther Singh is willing to fight for a striker's berth in the national team after struggling in the past two years to fulfill the promise that prompted former Bafana Bafana coach Stuart Baxter to hand him his debut three years ago.

Singh made his first appearance in a Bafana shirt in a 0-0 friendly against Angola in March 2017 and that match remains his sole outing at senior international level.

He will be eager to make a challenge when coach Molefi Ntseki charges play two critical friendlies against Namibia and Zambia this week.

The matches to be played at the Royal Bafokeng Sports Palace on Thursday and Sunday form part of Ntseki’s preparation for the resumption of the 2021 Africa Cup of Nations qualifiers against Sao Tome & Principe next month.

A good showing, perhaps capped with a goal or two, may see Singh retained for the back-to-back matches against the Islanders.

But he has to first convince the Bafana coach that he can do better than the experienced Kermit Erasmus, Lebogang Manyama and his Under-23 teammate Lyle Foster, who was set to join the team later on Tuesday.

“It’s always a great honour and great opportunity for me to represent my country,” Singh said after joining the Bafana camp from his Portuguese first division outfit FC Pacos de Ferreira.

“It’s always an honour and it’s actually good to be back in the national team after a long time, and once again I’m grateful for the opportunity I have got.”

Singh said Covid-19 which disrupted both Bafana and Under 23 programme that would have seen him represent the country in the now postponed 2020 Tokyo Olympic, has been challenging period for him as well.

“It’s been a difficult time for everyone, not only footballers but I’m glad that things are getting to normal slowly but surely.

"It’s been difficult being away from football for a period of time and coming back playing without supporters.

“We’re happy that we’re back on the field and we’re doing what we like doing the most.”

The Johannesburg-born player said the coming matches against Namibia and Zambia would give him a platform to display the progress he's made since his Bafana debut.

“Like I said, it’s an honour (to be in the Bafana squad) and with the quality we have in camp I feel like I can learn a lot from quality players like Kermit Erasmus.

"It’s just for me to express myself and learn from the players that they have here, the senior players that have represented SA at a higher level before.

“So I’m looking forward to working with them and to learn from them as well and also to help where I can.”

But starting in one or both matches will help Singh's development, who who many see as the future of Bafana as he only turned 23 in August.

Ntseki said he hopes to give a chance to young players like Singh and Teboho Mokoena, the SuperSport United midfielder, so that they get an opportunity to cement their future in the senior national team.

A spanking new Bafana Bafana kit will be unveiled for the first time to the public on Monday ahead of the national team's two international ...
Sport
1 year ago

Coach Ntseki explains the thinking behind his Bafana selections

Molefi Ntseki has explained why he cast the net wide for Bafana Bafana's friendlies against Namibia and Zambia‚ saying with a congested list of big ...
Sport
1 year ago