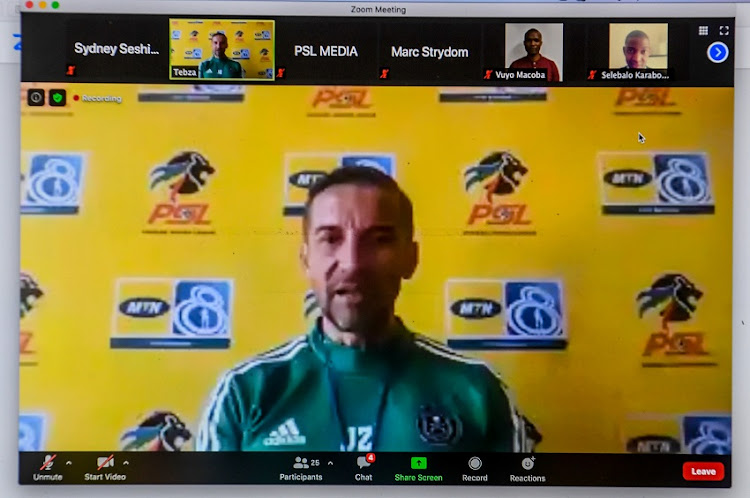 In a pre-match press conference on Wednesday for that cup tie Zinnbauer picked last season’s Premiership champions Sundowns – even though they have lost iconic coach Pitso Mosimane – and runners-up Chiefs as the favourites for the coming league season.

“Sundowns won the treble last year‚ and they have lost the coach‚ but he earned this move. He did a good job and I’m happy that he could find a top club in Africa‚” Zinnbauer said of Mosimane’s move to Egyptian giants Al Ahly.

“But he‚ and the squad that he had‚ won three titles last season at Sundowns. And that’s normal that they are the favourites.

“We cannot say now‚ ‘Sundowns are not the favourites’. They have‚ I don’t know‚ 40 or 50 players with top qualities in their squad.

“Kaizer Chiefs finished in second place. They were in the top position for a long‚ long time‚ and in the last game they lost that position.

“They were in second place‚ and it is normal that we now say that both teams will fight for the title.

“And maybe behind us are also other clubs who also maybe want to fight for a title or a trophy this year.

“But for me it’s Sundowns or Chiefs who are the favourites this season.”

Chiefs led the 2019-20 league season for almost the entire campaign but could not beat Baroka FC on the final day (1-1 draw) to clinch the trophy‚ allowing Sundowns to sneak Mosimane’s fifth championship at the club with a 3-0 win against Black Leopards.

Downs won the Nedbank Cup a week later to wrap up a treble‚ having won the Telkom Knockout in December.

Mosimane left Downs two weeks ago to join Ahly‚ with Steve Komphela‚ Manqoba Mngqithi and Rulani Mokwena taking over the reigns at the Brazilians.