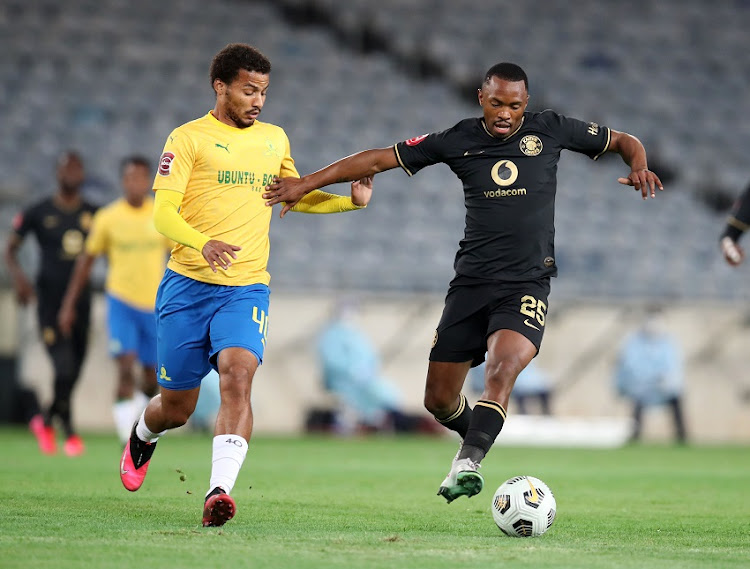 Bernard Parker of Kaizer Chiefs is challenged by Rivaldo Coetzee of Mamelodi Sundowns during the Absa Premiership match between Chiefs and Sundowns at Orlando Stadium on August 27 in Johannesburg.
Image: Muzi Ntombela/Gallo Images/BackpagePix

The first DStv Premiership season to carry that sponsorship title will kick off with a bang next Saturday October 24‚ with the marquee match-up between Kaizer Chiefs and Mamelodi Sundowns at FNB Stadium.

DStv takes over the sponsorship of the Premiership from Absa‚ and the new backers will be pleased to have such an auspicious match-up on the first weekend of the 2020-21 season as last campaign’s runners-up‚ Chiefs‚ and champions‚ Sundowns, go head-to-head.

Both teams will be under new leadership. Chiefs opted not to continue with Ernst Middendorp after Amakhosi led for most of 2019-20 but capitulated on the final day with a 1-1 draw against Baroka FC, to allow Sundowns‚ 3-0 winners against Black Leopards‚ to sneak in for the title.

Chiefs have appointed four-time league winner Gavin Hunt as their new coach. Sundowns have the triumvirate of Manqoba Mngqithi‚ Rulani Mokwena and Steve Komphela at their helm after five-time league winner at the club Pitso Mosimane left just more than two weeks ago to join Egyptian giants Al Ahly.

The three new teams to the Premiership get their first taste of top-flight football on Sunday October 25.

Tshakhuma Tsha Madzivhandila‚ who bought the franchise of Bidvest Wits‚ kick off against TS Galaxy‚ who purchased Highlands Park‚ at Thohoyandou Stadium.

New Kaizer Chiefs coach Gavin Hunt has said he wants to get playmaking star Khama Billiat “playing in the right areas” to get the under-performing ...
Sport
9 months ago