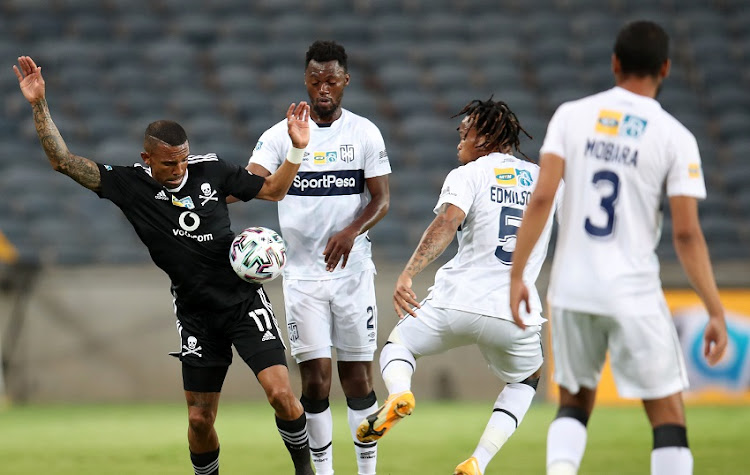 Orlando Pirates have a lot of firepower in 2020-21, and like a North Korean dictator they don’t mind showing it off either, a 1-0 MTN8 quarterfinal win against 10-man Cape Town City giving a hint of plenty more to come from the Buccaneers.

One of four Bucs debutants at Orlando Stadium on Saturday night, it was the little ex-Bidvest Wits forward Terrence Dzvukamanja who headed Pirates ahead in the 23rd minute. City played an hour with 10 men as a result of forward Fagrie Lakay’s 33rd-minute dismissal.

It might have been a win by a single-goal margin against a reduced force, but, as visible as Pirates’ first-match rustiness was, so was their glittering array of shiny new ballistic missiles.

Without doubt, Pirates laboured for much of the game. But their potential bulged under the surface like a bodybuilder’s frame in a T-shirt.

Quite possibly Bucs coach Joseph Zinnbauer’s biggest challenge in 2020-21 will be figuring out who to leave out, how to form combinations from who he puts in, and how to keep everyone else in the squad happy.

Zinnbauer, having said many of his signings were not up to condition yet, adventurously deployed a platoon of them, three from now-defunct Wits. Bafana Bafana captain Thulani Hlatshwayo wore Bucs' armband in central defence, Wayde Jooste was at right-back, Dzvukamanja upfront and Deon Hotto on the left, in an attacking line-up.

City coach Jan Olde Riekerink had skilful Bradley Ralani out with a calf strain, and star forward Kermit Erasmus had left for Mamelodi Sundowns, but otherwise a settled combination that had finished the extended Covid-19-affected 2019-20 season on form.

Pirates got the opener against the run of play.

City made the early running without a breakthrough, as the form team of the bio-bubble, just three weeks out of action in the much abbreviated preseason, settled quickly. That was also not surprising given Zinnbauer’s new-look combination.

But precision in application was a feature of Bucs’ stirring 34 points gained from 10 wins and four draws in 17 games after the German’s arrival in December last year.

The goal came with the look of being from the feet and head of a well-trained team. Jooste took a throw short to Siphesihle Ndlovu, received the return pass, and twisted and crossed perfectly onto the head of small man Dzvukamanja, who arched his back to get up and deflect expertly past stranded Peter Leeuwenburgh.

Ten minutes later life on the highveld got tougher for City, as Lakay went studs-in on Jooste, and referee Jelly Chavani reached for red.

Abbubaker Mobara’s free-kick harmlessly over with the last kick of the first half was symptomatic of how the teeth had been knocked out of City.

In the second half Gabadinho Mhango fed Vincent Pule through to force a stop from Leeuwenburgh.

Manqoba Mngqithi is the coolest of professional football coaches you can find in SA.
Sport
1 year ago