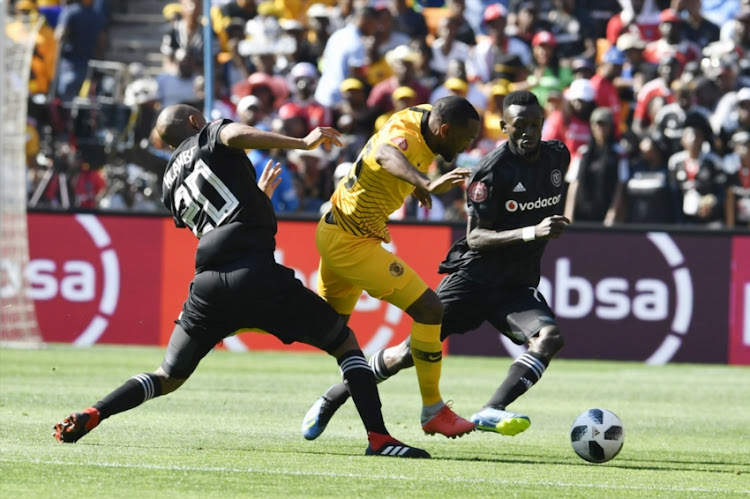 Fans are excited about seeing Kaizer Chiefs and Orlando Pirates clash so early in the season.
Image: Lefty Shivambu/Gallo Images

Mzansi football fans are over the moon after the first Soweto derby was confirmed over the weekend.

Old rivals Kaizer Chiefs and Orlando Pirates will meet in the MTN8 semifinals after winning their quarterfinal clashes against Maritzburg United and Cape Town City  respectively.

Pirates‚ who won the trophy back-to-back in 2010 and 2011‚ won their encounter 1-0, while Chiefs had to come from a goal down to book their place in the semifinals.

As if the emotional rollercoaster of watching their teams play wasn't enough, fans watched as the draw for the next round pitted the Soweto giants against each other.

The semifinals will be played over two legs, with dates and venues to be announced.

Soon fans flooded social media to share their thoughts on the mouthwatering clash and to post their predictions.

Many were happy with the draw, believing it would leave their rivals with one less chance of getting silverware this season.

Others just wanted to be able to attend the match, and planned to write to the sports minister to get him to lift the ban on spectators under lockdown.

Dear Footy Twitter. tomorrow we tagging Nathi Mthethwa the whole day.. Until he give us clearance for Soweto derby! and PSL Fixtures.. We have to return to the stadium

Praying for soweto derby so one of them remain cupless

#MTN82020
Khosi fam, it's time to do what we did last season kwi pirates.
Soweto derby we ready pic.twitter.com/HgfSrHbksv

Soweto Derby 😭😭 can we please forget about Covid-19 for just that match 😭😭😭 we wanna go to the Staduim ! #MTN8

Trophy drought will still continue in one of the Soweto Derby Hooligans .😂😂😂 pic.twitter.com/tKpaswssUR

May the best team win

Oh wait I meant to say that Kazier Chiefs will win this game #sowetoderby pic.twitter.com/2ymQUPX1aE

But the Soweto derby is better with fans even if you're watching at home pic.twitter.com/HM5Qy8G8ul

Soweto derby without fans the shit is sad ay pic.twitter.com/3U7IF6uiwu

"I will call the Minister of Sports and make it happen!#SowetoDerby #MTN8 pic.twitter.com/l6VWS0L0He

It's a Soweto Derby on the semifinals as I predicted 😂 pic.twitter.com/9IsWnGz8Yb

What is Soweto Derby without the fans mara pic.twitter.com/vNWx7GX52i

The MTN8 semi-final draw dished up a mouth-watering Soweto derby after Orlando Pirates were pitted against arch rivals Kaizer Chiefs on Sunday ...
Sport
1 year ago

Thulani Hlatshwayo has “a personal bond” with jersey No.3 and has always won the number since he turned professional and making his debut for Ajax ...
Sport
1 year ago

Kaizer Chiefs midfielder Lebogang Manyama has revealed that his award-winning goal against fierce rivals Orlando Pirates in February was the product ...
Sport
1 year ago