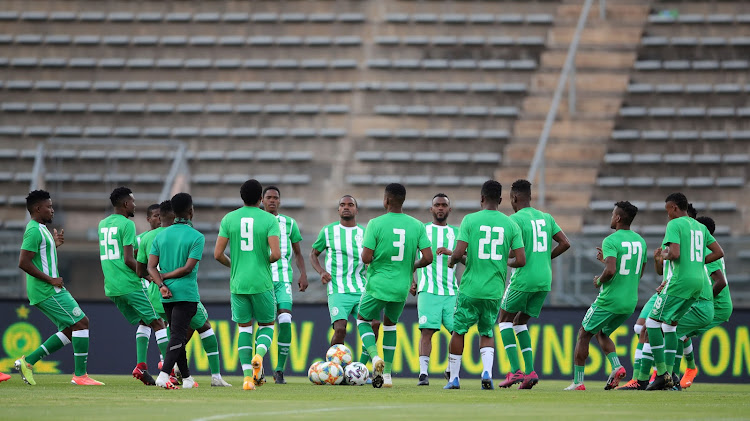 Bloemfontein Celtic players warm up before their MTN8 quarter final match away at Mamelodi Sundowns in Atteridgeville in Pretoria on October 18 2020. Celtic missed several key players for the match but still managed to win.
Image: Samuel Shivambu/ Backpagepix/ Gallo Images

Bloemfontein Celtic were rocked by a positive Covid-19 case on the eve of their match against Mamelodi Sundowns in Atteridgeville last weekend.

The player who allegedly tested positive is known to TimesLIVE and he missed Sunday’s 1-0 MTN8 quarterfinal win over Sundowns.

Celtic CEO Khumbulani Konco said the player and several others who missed the match were out due to injury‚ and not as a result of Covid-19.

“Which positive cases are you talking about?" he asked.

"We did not have any positive cases. If we had we would have announced. So we didn’t have [a positive case].”

Premier Soccer League (PSL) senior manager Lux Septemer said the league would on Thursday publish all the health protocols that will apply at DStv Premiership fixtures in the new season due to get underway this weekend.

Celtic were one of the few clubs who publicly announced results at the beginning of testing and they went public with a statement when midfielder Given Mashikinya tested positive for Covid-19 in June.

“If we have positive cases as Bloemfontein Celtic we do announce to the public for educational purposes and stigmatization‚” said Konco.

The Bloemfontein side was the second PSL club to publicly announce a positive test and followed Orlando Pirates who reported a month earlier that midfielder Ben Motshwari had contracted the virus.

Both Celtic’s Mashikinya and Pirates’ Motshwari have since recovered.

There have been reported positive cases at SuperSport United and Stellenbosch FC before and after the PSL bio-secure environment setup.

While there have been sporadic reported cases in recent months and weeks‚ PSL clubs mostly treat testing results as confidential with results seldom announced if at all.

Konco said his players were unavailable due to injuries and not Covid-19.

“When we have positive Covid cases we do announce them for educational purpose as well as shying away from the stigma‚” said Konco.

The Celtic CEO said the four players missed the Sundowns encounter should be available for selection and that the decision to select them rests with head coach John Maduka when Celtic kick off their Premiership campaign with a home clash against Lamontville Golden Arrows on Saturday (3:30pm).

“[They will return] as soon as they recover and the coach decides to put them in the team. It is the coach’s choice. If he decides to keep the team that played last week‚ it’s his choice.”

The winner of the 2019-20 campaign’s Footballer of the Season prize at Thursday night’s Premier Soccer League (PSL) Awards will pocket a whopping ...
Sport
1 year ago

'Another breakthrough but no arrest': SA weighs in on latest development in Senzo Meyiwa case

The latest development in the murder of former Orlando Pirates goalkeeper Senzo Meyiwa has opened up old wounds among people online.
News
1 year ago

Manchester United striker Odion Ighalo says he is ashamed of the Nigerian government following reports that soldiers opened fire on protesters in the ...
Sport
1 year ago