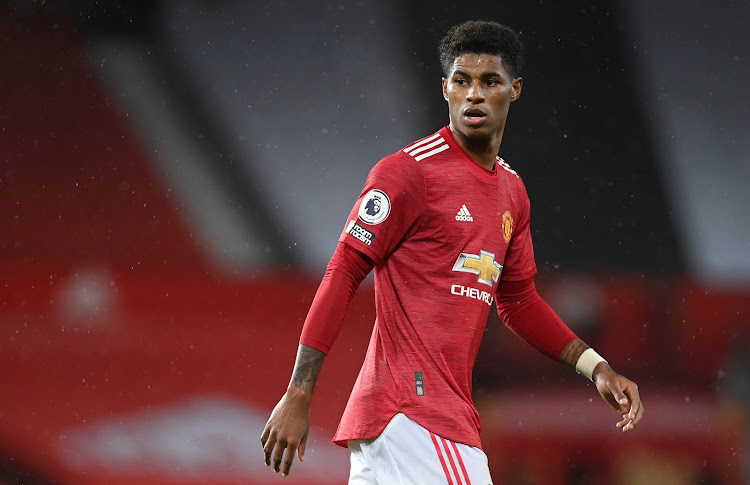 Marcus Rashford has been showered with praises for his charity work.
Image: REUTERS/Michael Regan

On Thursday, Rashford urged local businesses to tweet using the hashtag #endchildfoodpoverty, which would allow the 22-year-old to locate them.

Several have come forward to supply free school meals during half term in the United Kingdom.

"Let's do this Leeds. No children should ever go hungry. £25k guaranteed from the @lufc squad.

"We stand with you @Marcus Rashford," Cooper tweeted on Saturday, adding the team would continue to back the cause.

Rashford forced a government U-turn in July when he won his battle to ensure free school meals during the summer holidays.

He then proposed extending the campaign for families receiving financial assistance from the government.

Parliament on Wednesday rejected a Labour Party motion to extend free school meals until Easter 2021 from the cut-off before the half-term and winter holidays, prompting the England international to launch his campaign on social media.

Rashford has received widespread praise for his efforts, including from United's rivals, with Liverpool manager Juergen Klopp and Chelsea boss Frank Lampard among those expressing their admiration.

"I'm not sure I can find any better words than much smarter people, but what Marcus has started is absolutely incredible, it's so nice," Klopp said.

"It's nice to show in a time when a lot of people who are really in charge of something and don't show any sign of proper leadership, that a boy grown up in difficult circumstances and... never forgot his roots."

Arsenal playmaker Mesut Ozil tweeted: "Congratulations on all your amazing work @MarcusRashford. What you're doing is an incredible achievement... Keep up the great work."

Orlando Pirates get lucky with AmaZulu

AmaZulu will be right to feel aggrieved that they only got to share the spoils 1-1 with Orlando Pirates from a the dubious penalty awarded to the ...
Sport
9 months ago

Kaizer Chiefs coach Gavin Hunt has brought Leonardo Castro into his starting line-up for the opening 2020-21 DStv Premiership match-up against ...
Sport
9 months ago

All the action as Kaizer Chiefs clash with Mamelodi Sundowns

Dream rise: Sundowns star Mkhulise was a ball boy to Kekana and Zwane