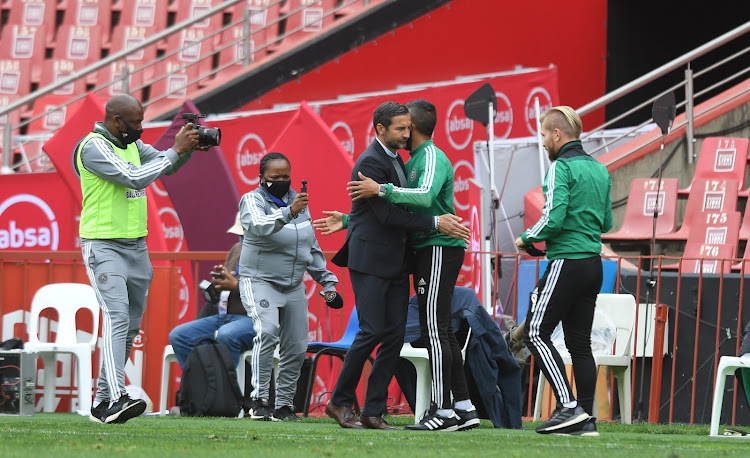 Orlando Pirates coach Josef Zinnbauer was a relieved man after his charges emerged with a share of the spoils in their opening league match of the season against AmaZulu in Durban on Saturday.

The German felt that his charges lost control of the game after racing to an early lead in the 18th minute.

“The first half was okay but after we scored the penalty we were too casual and lost the lead‚ but in the second half we showed what we can normally do in the game‚” the Bucs coach said.

“But it was not enough to win this game because we started too late to [try to] win the game. That’s the reason we drew the match but this is the point we got and we have to accept it and move on.

“A point is a point and it’s important for us. We worked hard for this point and it was not easy. AmaZulu are a good team with high pressure and they were fighting for three points.”

The Bucs were gifted the lead via a dubious penalty decision that was duly converted by last season’s joint league top scorer Gabadinho Mhango.

Referee Abongile Tom gave the Bucs the spot kick after Siphesihle Ndlovu was fouled by Sibusiso Mabiliso on the edge of the area. Tom initially looked to be awarding Bucs a free kick just outside the area but after consulting one of his assistants‚ the official awarded Bucs the penalty.

Usuthu managed to salvage the point through a penalty of their own which came in the 33rd minute after Fortune Makaringe was judged to have upended former Bucs midfielder Luvuyo Memela inside the area.

Pirates goalkeeper Wayne Sandilands saved Lehlohonolo Majoro's initial shot but was beaten on the rebound by the AmaZulu forward.

Zinnbauer admitted that his charges are yet to gel as a team‚ with a couple of new players still trying to adjust the way he wants the side to function.

“It was an away game for us and a home game for AmaZulu‚ and you saw the results in other matches. It’s not easy‚ the first game [of the season] is never easy. But I know exactly how the feeling is in the team.

“We have new players and we have to integrate the new players. This is a phase that we have but we need to create more chances in the final third to get the goals.

“It was the first game and we have the next game (against Stellenbosch FC) on Wednesday‚ and we have to focus on that.”

“We need freshness in the team and we’ll know exactly in the next two days what will happen.... the fitness and the spirit in the team‚ then we can make the decision for the next game.

“We’re always expecting to win the three points and it’s a home game now‚ but we know Stellenbosch is a good team. They’ve got good pressing‚ they always wait for the chance and they can play the counter-attack.

“Don’t forget the game we played against them bio bubble (Pirates won 1-0). It was a difficult match for us in the first 15 minutes and then we became better in the game. But we know exactly what we want and we will work on a plan to win these three points.”

Leeds United players have donated $33,000 to a campaign providing free school meals to children in Britain after being inspired by Manchester United ...
Sport
1 year ago

Galaxy and TTM share the spoils in their maiden Premiership showing

The return of those familiar maroon and white colours on South African football's highest level on the club stage will have pleased even their ...
Sport
1 year ago

So much is expected from AmaZulu this season and coach Ayanda Dlamini was happy with the point his charges earned from their opening league match ...
Sport
1 year ago