Orlando Pirates held to a draw by tough Stellenbosch 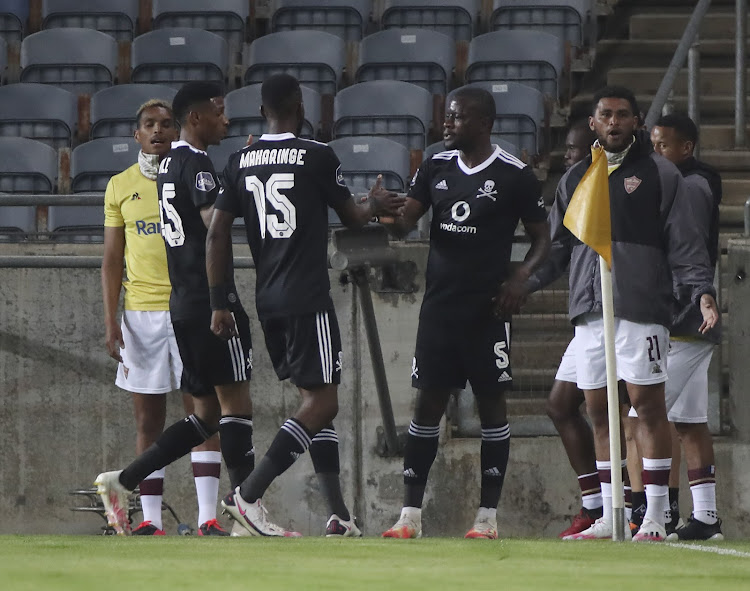 Orlando Pirates have failed to win in their opening two matches of the DStv Premiership after a draw against AmaZulu at the weekend.
Image: Gavin Barker/BackpagePix

Orlando Pirates are yet to win in the 2020-21 DStv Premiership, playing to a second 1-1 draw in five days against the dogged shape and defending of Stellenbosch FC at Orlando Stadium on Wednesday night.

The Buccaneers followed up their opener played to the same scoreline against AmaZulu at Kings Park in Durban on Saturday with another stalemate.

Pirates held the lead for a brief 10 minutes in the opening half after right-back Ntsikelelo Nyauza stabbed over from a corner in the 32nd minute.

Stellenbosch are nothing if not fighters, and they took advantage of a scrappy first half from Pirates to equalise through Nathan Sinkala in the 42nd.

Pirates, with all their new firepower of some strong signings to add to an already talented squad that underachieved to third place in 2019-20, are battling to find a stride early in this campaign as coach Josef Zinnbauer searches for his best combinations.

Against Steve Barker's resilient Cape Winelands team Bucs were unconvincing in the first half, though upped the tempo and pressed Stellenbosch to create some solid chances in the second, failing to profit from them.

Stellenbosch, once they settled as the promoted team last season, were tough to crack in the mould of their no-nonsense coach Barker, and ended a decent 10th.

As Bucs had to be content with early half-chances, Stellenbosch left-back Mark van Heerden's free-kick in the 26th was missed by Vincent Pule at the far post allowing Robyn Johannes to direct the ball at the head of Lelethu Skelem, who headed inches over an exposed goal.

For Pirates, Kabelo Dlamini’s dangerous shot was deflected off Alan Robertson for a corner.

Deon Hotto’s resultant delivery was headed down by Pule as Dlamini attempted to control metres in front of the line, Nyauza stretching a leg to connect as Bucs scrambled their opener.

Stellenbosch’s equaliser came from left-back Paseka Mako giving the ball away deep in his half, but was not undeserved.

Skelem held the ball up, and laid it off to the right for Zitha Macheke to cross, danger Zambian Sinkala rising to head past Ofori.

Bucs’ left-hand side of defence was exposed again as it was caught square for Ashley du Preez to run through and force a block from Ofori when the striker had Skelem free inside, as Pirates were fortunate to go to the break level.

Bucs grew in forcefulness after the break, increasingly pinning Stellies back, as substitute Thabiso Monyane saw a shot blacked for a corner, from which Nyauza’s free header went inches wide.

In the 70th Happy Jele punted up from his own half and another substitute, Zakhele Lepasa, ran through strongly, holding off defender Sibusiso Mthethwa.

The pacy forward got the touch past Langeveldt, but without strength and centreback Robertson was able to get back and clear from centimetres in front of the line.

Pule’s cross found centreback Thulani Hlatshwayo up in the box to force a save with a header.

Replacement Terrence Dzvukamanja burst down the left in the final minute of normal time and beat Langeveldt, this time Johannes doing the clearing.

As five men linked to the murder of Senzo Meyiwa appeared at the Boksburg magistrate's court on Tuesday, a video of a soccer fan who says he can't ...
Sport
1 year ago

Safa have come out to defend and clarify their unusual decision of announcing the Bafana Bafana squad at 10pm and exclusively to SABC on Monday ...
Sport
1 year ago

President Cyril Ramaphosa has welcomed the arrest of five people implicated in the 2014 murder of soccer player Senzo Meyiwa.
News
1 year ago

The family of murdered soccer player Senzo Meyiwa on Tuesday said they were shocked by the incidents that unfolded at the Boksburg magistrate’s court ...
News
1 year ago