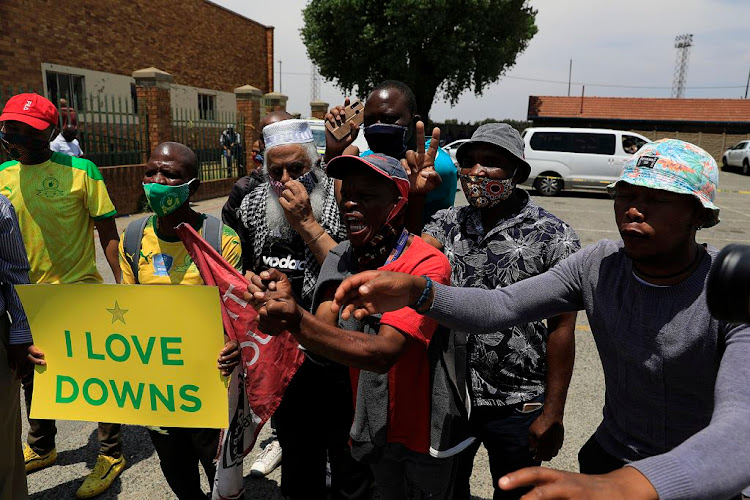 Five people appeared at the Boksburg magistrate's court on October 27 2020 for the murder of former Bafana Bafana captain Senzo Meyiwa. Fans outside the court said the justice system has failed the soccer fraternity.
Image: ALON SKUY

As five men linked to the murder of Senzo Meyiwa appeared at the Boksburg magistrate's court on Tuesday, a video of a soccer fan who says he can't trust the police to crack the case has gone viral on Twitter.

Speaking to Newzroom Afrika outside the courtroom, the man identified by sportscaster Robert Marawa as Bongani said the justice system has failed the soccer fraternity over the past six years.

He slammed police minister Bheki Cele, who has previously failed to deliver on his promises to apprehend the killers of the former Bafana Bafana goalkeeper. South Africans had high hopes last year after Cele said Meyiwa's case would be solved “before Christmas.”

“This is the second batch of witnesses or perpetrators who might have killed Senzo. I won't get excited just because the suspects are brought to court. I'll only get excited if there's actual progress and someone is charged and brought to justice,” said Bongani.

On Monday, the sixth anniversary of Meyiwa's murder, police gave the nation an update into the investigation. Cele said there was a watertight case against five men who were arrested earlier in the day in Gauteng and KwaZulu-Natal.

Bongani has dismissed this as yet another stunt by police to convince South Africans there is progress in the investigation.

South Africans were shocked when some of the men refused to enter the dock as they denied involvement in Meyiwa's murder.

From leaks to arrests: 5 responses from police on probe into Meyiwa's murder

Police minister Bheki Cele says the police have worked hard to crack Senzo Meyiwa's murder case over the past six years to ensure justice and closure ...
News
1 year ago

Others disputed claims made by Cele that they were arrested on Monday. Mncube, Maphisa and Ntuli did not apply for bail as they were in custody on other cases. Sibiya and Ntanzi said they did not know how they were linked to the murder.

Speaking for Meyiwa's family, Senzo's brother Sifiso said the family was shocked that some of the suspects refused to enter the dock because police had informed the family they had confessions.

Meyiwa was gunned down on October 24 2014 at the home of his girlfriend, singer Kelly Khumalo, in Vosloorus. Khumalo, her sister Zandi, their mother Ntombi and Longwe Twala were among those who were present at the time of the murder.

A confidential NPA document — which has been confirmed as authentic — has linked Senzo Meyiwa’s girlfriend Kelly Khumalo to a suspect in the Bafana ...
News
1 year ago

The family of murdered soccer player Senzo Meyiwa on Tuesday said they were shocked by the incidents that unfolded at the Boksburg magistrate’s court ...
News
1 year ago