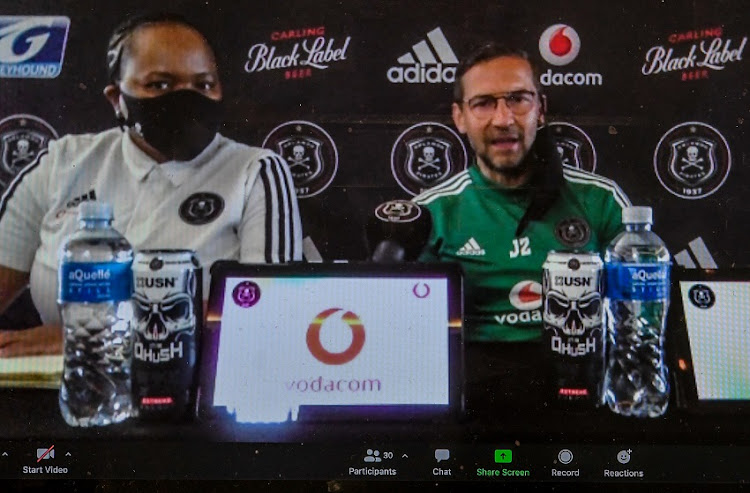 Orlando Pirates coach Josef Zinnbauer allowed himself to express his frustration that his team could not apply the tactics in the first half he said they had planned for in Bucs’ 1-1 DStv Premiership draw against Stellenbosch FC on Wednesday night.

The Pirates juggernaut and its array of big name new signings continues to stutter early in the season‚ following a 1-1 opening league draw against AmaZulu in Durban and  another stalemate against Steve Barker’s tough Stellenbosch at Orlando Stadium.

Bucs‚ who meet Kaizer Chiefs in Saturday’s first leg of their Soweto derby MTN8 semi-final at Orlando‚ were disjointed in the first half‚ but improved markedly in the second‚ whenthey were unable to profit from a string of solid chances.

A 1-0 MTN8 win against 10-man Cape Town City in Bucs’ season-opener was also not overly convincing.

Zinnbauer was asked how he fells about the murmurs of discontent from Pirates fans that‚ having had a two-week mini-preseason  and a lot of signings‚ Bucs should have at least won one of their two league games.

“Today we went into the game wanting the three points. And at home it’s always so. We know it’s not always possible. But when you see the second half you know it was easily possible [tonight].

“When you see the first half‚ then it’s not enough for one point. And those are the things we have to change.

“The opponent made us vulnerable in the first half‚ but we found nothing in the structure that we had in the plan.

“We improved a structure the whole week for the opponent‚ and then it’s not working on the pitch.

“That’s the key we have to find earlier. That is not magic. It’s normally easy in football.

“We know it’s not easy that you can win all your games. I heard the other results‚ and maybe all the teams struggle a bi.

“But we cannot compare with other clubs. We have to see to us. We need three points‚ and that’s the point that we have to work on quick.”

With so many new players‚ finding the right combinations can take time. An example would seem to be Deon Hotto‚ who so far has been deployed at left-back‚ left wing and on Wednesday night in midfield‚ when at Bidvest Wits the Namibian was generally more a forward.

Zinnbauer again said getting all the new players to the same level of conditioning as his existing squad is proving as challenging as finding the right combinations.

“Yes‚ sure we have to find the roles in the game for the new players. That’s normal‚” he said.

“We have the qualities for the players‚ but more important is the conditioning. It’s very important that we improve this.

“A lot of players came to us with injuries‚ and we can work on their conditioning.”

Orlando Pirates held to a draw by tough Stellenbosch

Orlando Pirates are yet to win in the 2020-21 DStv Premiership, playing to a second 1-1 draw in five days against the dogged shape and defending of ...
Sport
1 year ago

Striker Justin Shonga has penned a heartfelt farewell letter to Orlando Pirates’ management after he was released by the club following a frustrating ...
Sport
1 year ago