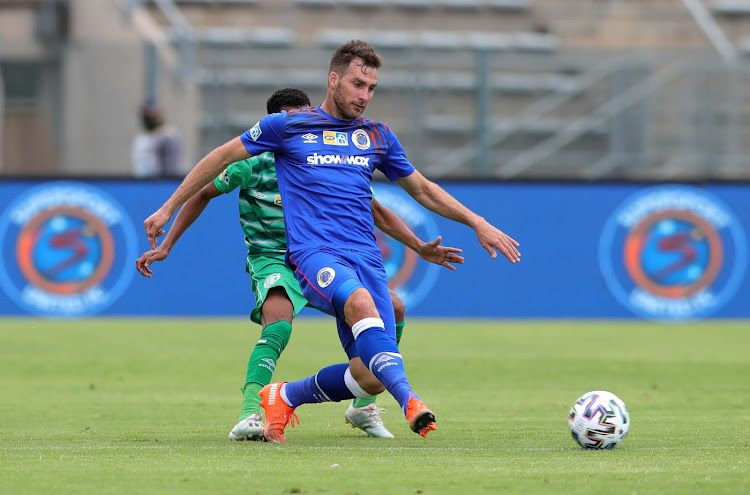 SuperSport United coach Kaitano Tembo has said striker Bradley Grobler is still in a good headspace despite the player’s purported move to Orlando Pirates falling through during the transfer window.

Despite scoring three goals in all competitions in the four matches that Grobler has played for SuperSport so far this season‚ coach Tembo was asked if the striker’s heart is still with the three-time Premiership champions after the 32-year-old Bafana Bafana target man was strongly linked with a switch to Pirates.

“Look‚ Bradley is a professional player and I think he is never really distracted [by the speculation linking him to Pirates]‚” Tembo said after his side had to come from behind to force a 1-1 draw against Bloemfontein Celtic in an MTN8 semi-final first leg match in Atteridgeville at the weekend.

Grobler’s links to Pirates were so strong that even United CEO Stan Matthews came out publicly in support of the player leaving for the Bucs in an interview with the media in August.

Matthews urged Grobler two months ago to push hard to help SuperSport win a trophy and be in a good position in the league. He said this might help the striker’s chances of joining Pirates or any team of his choosing during the transfer window.

“He [Grobler] is important in our attacking structure and as far as I know he is still with us and that’s what we go with.

“I’m happy with his contribution in the team and I look forward to him banging in more goals for us this season.”

Tembo bemoaned a poor first half that led to United conceding an early away goal against Celtic. He said his charges will work to rectify their mistakes ahead of the second leg in Bloemfontein on Saturday afternoon.

“Going into the second leg I think the pressure is on them‚” said Tembo of the advantage Celtic have with their crucial away goal.

“They have the advantage and for us we just have to go out there [on Saturday] and play our normal game and we should be able to come through [with a positive result].

For the time being SuperSport turn their focus back to the DStv Premiership when they host Stellensbosch FC in Atteridgeville on Wednesday needing to bounce back after they were thrashed by Lamontville Golden Arrows in their last league match.

SuperSport have only three points from their opening day win over Black Leopards.