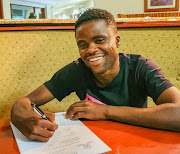 Mamelodi Sundowns co-coach Manqoba Mngqithi has explained why exciting and attacking midfielder Lesedi Kapinga is not yet ready for competitive action.

The 25-year-old Kapinga‚ who was signed by former coach Pitso Mosimane from Black Leopards in July‚ has not featured in Sundowns' three matches this season in the MTN8 and in the league.

“He is still trying very hard to adapt to the conditions of Sundowns‚” said Mngqithi who leads a technical team that also includes Rulani Mokwena and Steve Komphela.

“He is a very good player offensively but he still has a lot of work to do defensively.

"Unfortunately‚ at Sundowns we expect everybody to help the team when we don’t have the ball.

"We work very hard to try and regain possession of the ball and that is one of the bigger aspects of his game that must improve.

"He is also not taking very good care of the ball‚ he loses the ball cheap and in a big team like Sundowns when you lose balls now and again you are always exposed to counter attacks.

“Those are some of the areas where he still has to improve on. He is a very good player and we know what he is capable of.

"But there is still an amount of work that he still has to do for him to command a start or even a substitute position at Sundowns.”

The Brazilians have a day off this weekend as they are not involved in the MTN8 semifinals.

Mngqithi said this rare time away from the pitch gives them time to work on integrating some of the players into the setup.

“We still have issues of adaptation for some of the players and we are trying to integrate everybody within the team.

"So this gives us a little bit of time to work without the pressure of preparing for a game.

"[We can work] on the aspects of things we think are important‚ and to play the way we want them to play.

“We are encouraged by some of the things we have seen already and the changes we are trying to bring to the team structure from a build up perspective in the midfield‚ on the consolidation side and also our creative side in the number ten position where Zwane and Mkhulise find themselves a lot.

“Our wing play at times is not as crisp as one would have loved‚ our position to isolate at times the movement or the speed of the ball is not what we want.

“When you don’t get the maximum points you start feeling negative and the vibe is not the same‚ but we are confident that we will be able to come up with something after the break.

"In as much as one will be focusing on the training of the team and integrating new players‚ we are also at looking to have one or two friendly matches.”