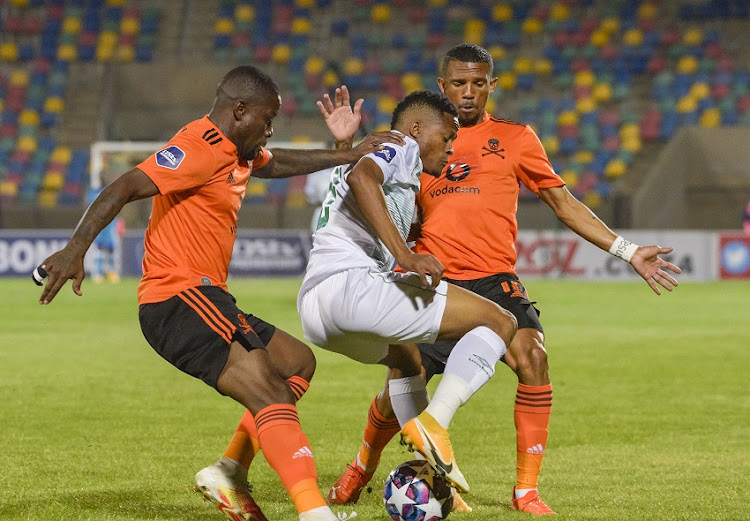 Siphesihle Ndlovu came off the bench to give Orlando Pirates their first win of the season in a game that looked destined to end in a dull draw before the former Maritzburg United midfielder lightened it with a fine bender, his first goal in a Bucs shirt, in the 75th minute.

The goal helped Pirates beat Bloemfontein Celtic 1-0 at the Petrus Molemela Stadium in the Free State on Wednesday night and it moved the Soweto giants to the top half of the DStv Premiership log.

Both Celtic and Pirates came to this match winless in their previous two league matches and Celtic looked to earn a second draw after managing to keep a clean slate before Ndlovu came on for Thabang Monare to find the winner with a strike he took just outside the area.

That the first real save of the match came in the 65th minute when Pirates’ Vincent Pule tested Sipho Chaine in Celtic's goals, with a half a chance outside the box, further highlights how much these sides battled to produce the important thing in a game of football — the goals.

The loss, a second one in three matches, leaves Celtic in the bottom part of the 16-team log that now has reigning champions Mamelodi Sundowns as leaders with seven points in three matches.

Clearly though John Maduka, the Phunya Selesele coach, came to this match with his mind on Saturday’s second leg of the MTN8 semifinal against SuperSport United judging by the raft of changes (eight) he made in his team's starting line-up.

Only defender Justice Chabalala, midfielder Siphesihle Luthuli and striker Motebang Sera survived from the line-up that started in the 1-1 draw against SuperSport in Pretoria on Sunday.

There was no such drastic shuffling of the team for Fadllu Davids, who stood in for Bucs head coach Josef Zinnbauer who had to rush home to attend to his son who is fighting for his life in a German hospital after being involved in a nasty car accident.

With Pirates already having one foot in the MTN8 final after their spectacular 3-0 win over bitter Soweto rivals Kaizer Chiefs on Saturday, Davids made only one change, bringing on the skipper Happy Jele in the team that started against Chiefs.

That change was as a result of Thulani Hlatshwayo having not recovered from the injury that worsened in the Soweto Derby on Saturday where he had to limp off and leave the field immediately after Bucs took a 2-0 lead in the second half.

Pirates wearing their peculiar black and orange strip were forced to make a change in the 13th minute of this match after their talisman Thembinkosi Lorch had a knee injury that prompted Davids to introduce former Bidvest Wits winger Deon Hotto.

That change did not help Pirates much as they ended up with heavy overloading on the left side where they had Hotto, Innocent Maela and Vincent Pule all crowding that area at times.

There were far too few clear-cut chances in the opening 45 minutes but Bucs should have taken the lead in the 21st minute when Pule received Maela’s cross on the left but shot wide when he had time and space in the area.

The home side had difficult in creating chances as Sera and his partner Tebogo Potsane saw little ball to trouble Richard Ofori in Pirates goals.

But Sera should have done better when he had a free header in the area in the 35th minute when Celtic won a corner kick.

Pirates were in full control of the match with Ben Motshwari and Monare bossing the midfield area where Celtic’s Luthuli and Neo Maema were struggling to match the quality of the Bucs central midfielders.

But will all their might Pirates failed to feed their strikers Zakhele Lepasa and Terrence Dzvukamanja with good passes that could have made goals in the first half that ended with no side having had a shot saved by either of the goalkeepers.

Chiefs defender Zulu wary of TS Galaxy challenge: 'If we focus on the negativity‚ it will affect us'

Kaizer Chiefs left-back Philani Zulu says their league match-up against TS Galaxy at FNB Stadium on Wednesday night is “as important as any game we ...
Sport
1 year ago

TS Galaxy will not look to the past as they seek another famous upset against Kaizer Chiefs in the teams’ first meeting since Amakhosi’s fateful and ...
Sport
1 year ago