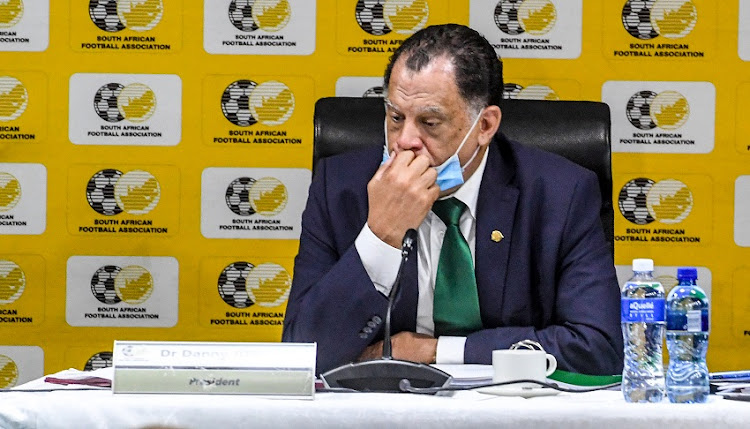 Banyana Banyana won their fourth successive Cosafa Women’s Championship with a 2-1 victory against Botswana in the final at Nelson Mandela Bay Stadium in Port Elizabeth on Saturday.

At the same stadium‚ Bafana Bafana completed a double against Sao Tome and Principe with a 4-2 Africa Cup of Nations qualifying win on Monday‚ following their 2-0 win against the islanders in Durban on Friday.

The two victories have left the men’s national team on nine points in Group C and in striking distance of qualification for the 2022 Nations Cup in Cameroon.

“This weekend was an incredible weekend for South African football‚” Jordaan said‚ addressing Bafana in a post-match function.

“They were given the trophy because they won it three times in a row. So Cosafa bought a new trophy‚ and they won that trophy again.

“But this time the remarkable thing is that we have 32 players playing in Europe‚ and the coach [Desiree Ellis] didn’t call any of those players. She called local-based players‚ who come from the national league of women‚ and five Under-20 players – who are again the Cosafa champions. So the women are doing extremely well.”

Addressing Bafana’s two victories‚ Jordaan said it was not about whether the national team won pretty‚ or not‚ but about the six points gained‚ which he said has put Bafana “in a good position”.

“We go into Christmas and the New Year in the position we were talking about‚” Jordaan said.

“We needed six points against Sao Tome‚ we needed to be on nine points going into the break [in qualifiers].

“Now in football‚ sometimes you have your own idea. In the end you must win. There’s no such thing as winning pretty‚ or ugly – you must win.

“We have to qualify for Afcon – that’s what we said. And we must congratulate you for getting the three points today and getting the goals‚ because we are now on [+3 goal difference]‚ which can also sometimes be how it’s decided.

“So I think we are going into the break in a good position.”

Bafana meet Group C leaders Ghana at home and then third-placed Sudan away in their final two Nations Cup qualifiers in March.