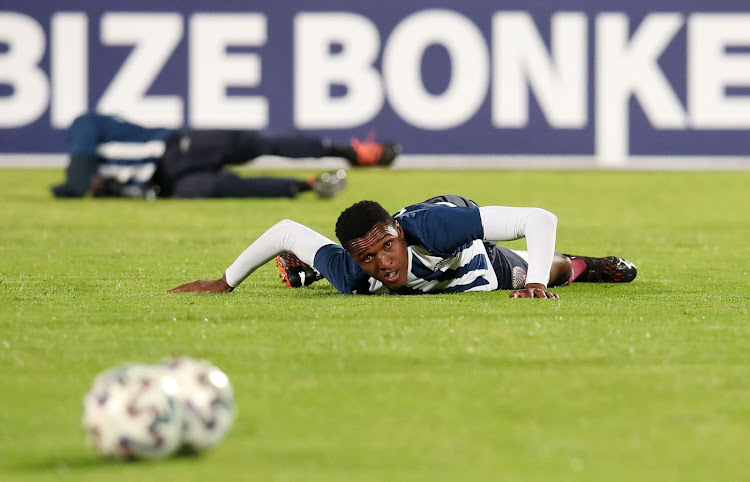 The drainage system at the Dobsonville Stadium in Soweto is not up to required standards and crumbles under heavy rain.
Image: Muzi Ntombela/BackpagePix

Pitso Mosimane was so incensed with the state of the pitch at Dobsonville Stadium a few weeks ago that he called for the Soweto venue to be closed and banned from hosting topflight matches.

But the former Mamelodi Sundowns coach's vociferous call was not heeded by the Premier Soccer League (PSL) and the pitch is expected to once again take centre stage when second-placed Swallows FC host Kaizer Chiefs in a potentially delicious DStv Premiership match on Tuesday night.

The showers that have swept across Johannesburg in the last few days will not have helped matters and Swallows coach Brandon Truter conceded that even the home side could have a difficult time adapting to the pitch if the heavy rains have battered the surface.

"The Dobsonville pitch also, not the easiest pitches when it is wet and it is raining, so the players will definitely feel it," he said.

"But jah, it is our home game and of course we want to get the maximum points on offer, so that is what we will be going for.

"Chiefs are definitely on the up, they are getting better, they want to be at that level and they scored two goals [against Golden Arrows at the weekend].

"So there is definitely a threat. But it is how we manage the game, that will be the key."

The nation's soccer lovers would have descended on Dobsoville Stadium in great numbers on Tuesday night had Covid-19 not intervened and altered life as we know it.

The Dobsonville venue would have been a hive of activity and given Chiefs following, they would have dominated the stands.

Truter opined that the absence of the fans in the stands has had a greater affect on the visiting AmaKhosi than on any other club in the league as the multitude of screaming supporters serve as their 12th player.

"It [playing in front of empty stands] does have an effect, but we [as Swallows] have managed it well," he said.

"When the bio-bubble came and there were no crowds [last season], we were very successful in playing without the crowd. So this season continues like that.

"I think it [has] affected Chiefs a bit more because they are used to the big crowds, the crowds being the extra player on the  field, and pushing them.

"We could see that in the bubble when there were no crowds and how it affected them [Chiefs surrendered the league title to Sundowns on the final day of the season after leading almost the entire campaign].

"Maybe it is still on their minds, they are used to that [the packed stands cheering for them], so jah, I think it affected them more than us.

"But it would have been nice to have had a full Dobsonville Stadium for this game."

Truter has plenty to ponder before kick off after playing to a draw against TS Galaxy on Saturday.

Some of his players picked up knocks against Galaxy while some have to overcome fatigue before lining up against coach Gavin Hunt's stuttering charges.

Swallows could regain the top spot with a win against Chiefs after they were knocked off their perch by leaders Sundowns on Sunday.

The Birds had gone to the summit after their match against Galaxy on Saturday but Sundowns' 4-3 seven-goal thriller against AmaZulu enabled them to force Swallows off the top spot.

November 1 2016 is a date Orlando Pirates diehards would like to forget. Not just for a moment, but forever.
Sport
1 year ago

SuperSport United coach Kaitano Tembo has admitted that their defending has been a huge source of concern since the start of the season last month ...
Sport
1 year ago

Maritzburg after sacking Tinkler: 'The results have not been forthcoming'