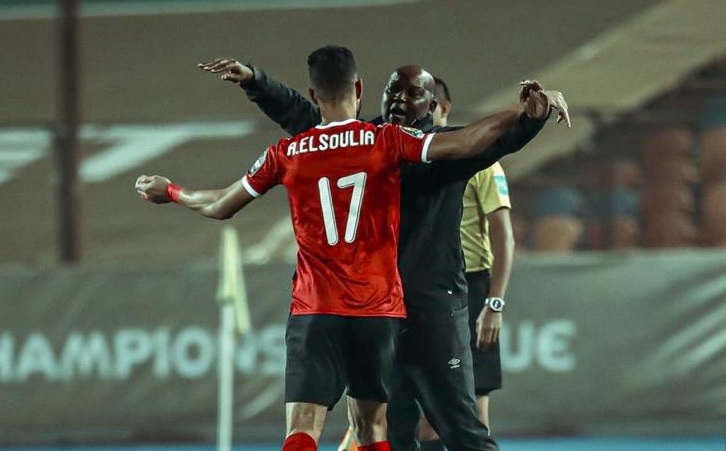 Pitso Mosimane has entered the annals of elite coaches on the African continent to have won two Caf Champions League trophies, steering Al Ahly to their first title since 2013 and their ninth overall with Friday night's dramatic 2-1 final win against Zamalek.

Two of the continent’s greatest rivals served up a final of peerless pace and class at crowdless Cairo International Stadium, as one could only imagine how such a derby final between the great city’s giants might have transpired had it been played in front of their fanatical supporters.

Amr El Soleya headed Ahly into the sixth-minute lead, Shikabala equalised with a spectacular strike for Zamalek in the 31st, and Mohamed Magdy produced an as beautiful winner for Mosimane’s team in the 86th.

Mosimane adds to his Champions League title won in 2016 with Mamelodi Sundowns, who he left in a shock move to Ahly in September to become the African Club of the 20th Century's first black Sub-Saharan coach.

The coach took over from Swiss friendly acquaintance Rene Weiler at the semifinal stage, where he engineered an impressive 5-1 aggregate win against Wydad Casablanca.

Mosimane joins an elite band of seven coaches to have won the Champions League – or previously the Champions Cup – more than once.

His team had to make use of all their class and organisation to hold off a whirlwind challenge from Zamalek, who ran at Ahly for much of the final.

Ahly started the opening half on the front foot and were rewarded with an early goal. Mohamed Magdi Kafsha’s corner from the right was landed with precision on the head of big defensive midfielder El Soleya, who headed past Zamalek goalkeeper Mohamed Abougabal.

The goal, though, only seemed to awaken a tiger within the White Knights. Zamalek piled on the pressure, with Achraf Benchanki shooting across the face of goal.

It was the classy midfielder Shikabala who produced the moment of excellence that drew Zamalek level. With the ball at his feet near the right touchline, Shikabala beat Ali Maloul and Junior Ajayi to burst into the middle and strike a magnificent left-footed finish past Mohamed Elshanawy.

Zamalek came out from the change rooms continuing to threaten.

But it was Ahly who should have taken the lead again, against the run of play. The Red Devils swarmed and opened Zamalek with numbers in attack, and Maloul squared across the area to find striker Hussein El Shahat who, with Abougabal stranded and an open goal beckoning, struck the upright.

That opportunity only, somehow, increased the pace of an already frenetic contest. Almost as if to prove they were still in the ascendancy, Zamalek also hit the woodwork, midfielder Zizo driving thunderously from 35 metres onto the upright.

Ahly, though, showed the patience of champions to gather their structure and strength, while Zamalek tired in the final quarter.

The Red Devils earned their winner with another spectacular strike fitting of the class of the match. Magdy beat a defender to a ball off the ground outside Zamalek’s box with his knee, and struck a first-time volley that scythed like a crusader Sultan’s sword past Abougabal.

Sundowns: Gaston Sirino may be bringing the club into disrepute

Mamelodi Sundowns have slammed star Uruguayan midfielder Gaston Sirino for bringing the club into disrepute with his public utterances about his ...
Sport
4 months ago
Next Article