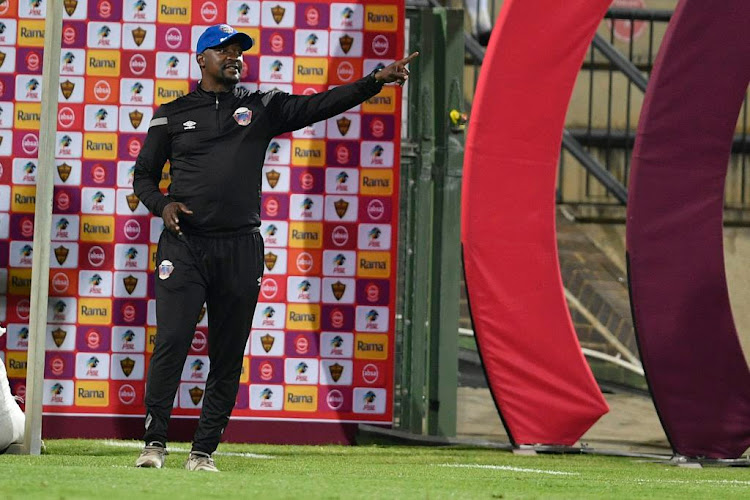 Chippa United coach Lehlohonolo Seema was left thinking about what could have been after his team dropped valuable points in their DStv Premiership fixture against Tshakhuma Tsha Madzivhandila at Nelson Mandela Bay Stadium on Sunday.

The Chilli Boys disappointed as they laboured to a 1-1 draw against 10-man TTM in a game Seema thought he would collect a full haul from.

“I think we dropped two points,” Seema said. “It never looked like we were going to lose this game. But that is how the game of football is. I think we did not push much, especially in the first half. I think we could have done better.

“As a young team we should be learning very fast that we are in a competition. It's two points lost.”

Seema said it would take some time for them to find their feet, having basically assembled a new team this season after the exodus of 15 players, and with most of the new players making their debuts in the PSL.

Chippa United disappointed as they laboured to a 1-1 draw against 10-man Tshakhuma Tsha Madzivhandila in their league match at the Nelson Mandela Bay ...
Sport
1 year ago

“We have to be patient with these boys. The team will come right,” the coach said.

The Port Elizabeth-based side went into the game having been dealt a huge blow with the sale of captain and goalkeeper Veli Mothwa on Friday.

Asked if Mothwa’s sudden departure disrupted his planning going into Sunday's match, Seema replied: “No, we had a goalkeeper in the goals and we played. So no, I don’t think so.”

TTM head coach Joel Masutha said the point away from home was well-deserved.

“It was a very tough game,” Masutha said. “When I saw the line-up of Chippa I knew it was based on speed. They came and harassed us — we were very slow coming out the blocks. I think that gave Chippa confidence that they could get something. But the most worrying part is how we conceded the goal.

“We have been working and pushing these guys to play to the whistle. We should have cleared that ball and we were never going to be under pressure. But at the same time, after going a man down on the hour, it also showed the character the boys have.

“They fought like hell. For me, I can say it’s a well-deserved point,” said Masutha.

Hunt warns his Chiefs charges to guard against complacency: 'You can’t relax because it’s only halftime'

Kaizer Chiefs coach Gavin Hunt has cautioned his charges to guard against complacency when they host Cameroon side PWD Bamenda in the return leg of ...
Sport
1 year ago

Mamelodi Sundowns will continue to celebrate former Bafana Bafana defender Anele Ngcongca's life in their next 15 matches.
Sport
1 year ago