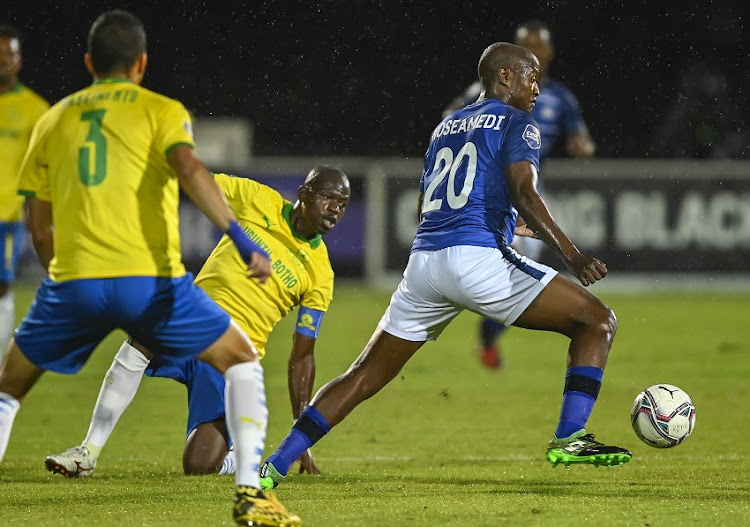 Mamelodi Sundowns were held to a 1-1 draw by Maritzburg United during their DStv Premiership match that was played at the Harry Gwala Stadium on Saturday night.

As a result of this stalemate, the Brazilians remain top of the standings with 14 points from six matches while Maritzburg earned their first point of the season even though they remain bottom of the table.

Maritzburg coach Ernst Middendorp has a lot of defensive work on his hands as they once again failed to keep a clean sheet by conceding their tenth goal.

Sundowns, who had co-coach Manqoba Mngqithi red carded in the second half by referee Victor Gomes, will rue the fact that they wasted numerous scoring chances in the first.

Sundowns’ goal was scored on-form attacking midfielder Themba Zwane, who hammered his sixth of the season, while the People’s Team replied through defender and man-of-the-match Kwanda Mngonyama.

A few minutes later, Shalulile found himself in a good position and he tested home goalkeeper Sebastian Mwange with a close range shot after a good attacking move with Zwane.

It was not all Sundowns during the early exchanges as Maritzburg also had their few opportunities on the attack through Judas Moseamedi, Thabiso Kutumela and Keagan Buchanan .

Their most notable chance came just before the half hour mark when Moseamedi was denied by alert Sundowns goalkeeper Denis Onyango who moved out of his line to divert the ball for safety.

Sundowns opened the scoring after 32 minutes when Zwane tapped home a cross from Lebohang Maboe as the Bafana Bafana continued with his rich vein of early season form.

Maritzburg equalised through defender Mngonyama who rose above everyone and unmarked in the box to head home a well-taken corner kick from Dan Morgan to earn Maritzburg a crucial point.