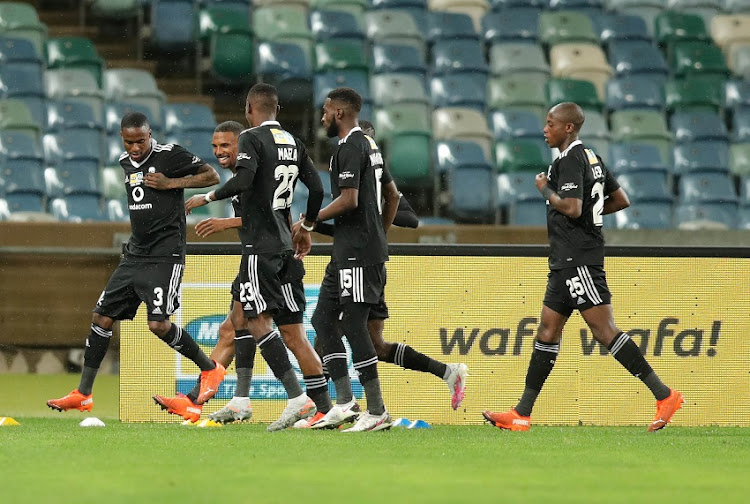 Orlando Pirates ended their six-year trophyless spell in the Premier Soccer League when they came from behind to defeat a 10-man Bloemfontein Celtic 2-1 to win the MTN8 at the Moses Mabhida Stadium on Saturday night.

The Buccaneers had lost four times in cup finals and finished twice as runners-up in the league championship during those six barren years, but there was no denying the Soweto giants walking away with R8m and having their time in the sunshine, albeit at a wet iconic and empty Durban venue.

In that trophy starvation Pirates leave behind their Soweto rivals Kaizer Chiefs who are in a five-year unprecedented run of not winning any silverware in the PSL. Amakhosi will equal the Bucs’ dismal record if they don’t win the DStv Premiership, Nedbank Cup or the Caf Champions League this season.

Pirates’ victory could well be a clear signal that they’ve found their mojo and they could well be huge challengers to reigning PSL champions Mamelodi Sundowns in the Premiership in the 2020-21 campaign.

Josef Zinnabuer’s team is one of the four teams yet to be beaten in the league this season, but Bucs’ bright start has been impaired by four draws in six matches and they remain four points behind the table-topping Brazilians.

In a game that could have gone either way, Pirates prevailed through Deon Hotto (32nd minute) and Thembinkosi Lorch’s penalty (53rd minute), to win their 10th top eight trophy in 15 finals of what was the 44th edition of the competition

Zinnbauer has been seeing his charges conceding first and forced to rework their strategy during the last three league matches against SuperSport United (2-1), Baroka (1-1) and Cape Town City (2-2), and the 50-year-old German, who completed a year with the club on Thursday, couldn’t halt that dangerous trail again in Saturday's final.

Poor marking allowed Phunya Sele Sele to grab the lead in the fourth minute after Siphelele Luthuli was left with acres of space inside the box to pick his spot as the Bucs defence failed to clear Menzi Masuku’s corner kick.

But like they did in the past three league games, Bucs’ vast quality, especially in the attacking areas showed.

After going a goal down Pirates started to dominate possession and even the injury to midfielder Thabang Monare midway through the first stanza came as a blessing as Zinnbauer, who won his first trophy as a coach, introduced Lorch to give Pirates more attacking options. The Bafana Bafana player went on to grab the priceless winner for the Buccaneers.

The winning strike was more gifted by Celtic who failed to deal with Bucs keeper Richard Ofori’s long range clearance and the ball went all the way to the box where Celtic’s Ronald Pfumbidzai bungled Lorch and referee Luxolo Badi pointed to the spot and gave the Zimbabwean defender his marching orders.

With a one man advantage Pirates dominated more though they were guilty of missing a number of gilt-edged scoring opportunities. They missed wrapping up the game as a contest as the spectacle opened up more with John Maduka’s team trying to find an equaliser.

Maduka, who won this trophy as a Celtic player in 2005, will be gutted to have lost a second final within four months of being appointed as Celtic head coach. His team lost the Nedbank Cup final to Mamelodi Sundowns in September. The Free State club went into this match looking for their first honours since 2012 to add to three other trophies they’ve won in 50 years.

In the end, though, Pirates’ deserved their victory and with a better defensive discipline, Zinnbauer’s team could go on to claim more famous victories this season.

Still Zinnbauer will worry about the team’s defensive frailties and their failure to avoid gifting their opponents the leads, which is precisely the reason Bucs have played so many draws in the league this season.

But based on Saturday's performance Pirates and their supporters could not be stopped being “Happy People” once again.

AmaZulu FC supporters will know early next week who will take over as the club’s head coach after the sudden departure of Ayanda Dlamini from the hot ...
Sport
1 year ago

Marcus Rashford only has eyes for Manchester United

Marcus Rashford is drawing interest from some of Europe's top clubs but the young Manchester United forward said he wants to be a one-club man.
Sport
1 year ago