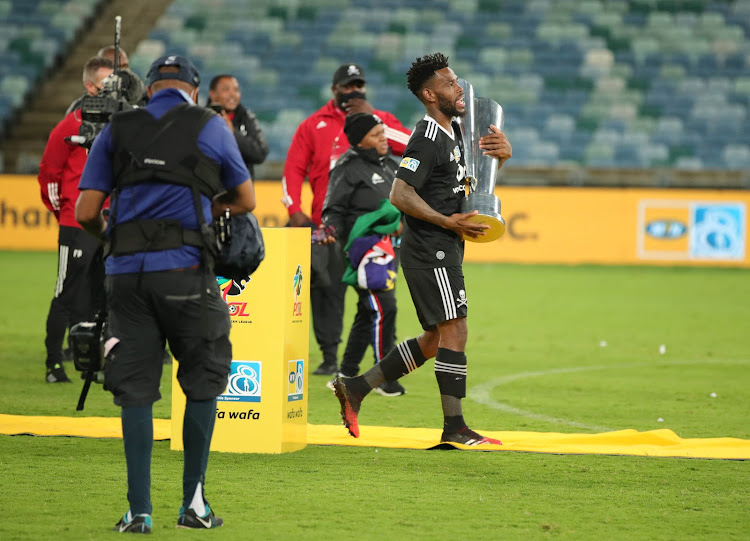 Captain Thulani Hlatshwayo with the MTN8 trophy after Orlando Pirates beat Bloemfontein Celtic in the final in Durban on December 12 2020.
Image: Samuel Shivambu/BackpagePix

Orlando Pirates captain Thulani Hlatshwayo says they cannot afford to keep conceding early goals and will need to guard against this continuing trend when they host Chippa United in a league match at Orlando Stadium on Wednesday night.

Pirates have had to claw their way back from behind in four successive matches and this increasingly familiar sight is worrying Hlatshwayo.

“For sure‚ without a doubt‚ as defenders we become unhappy [when we] concede so early in the game because it shows a lack of concentration in the back four‚” Hlatshwayo.

“So‚ yes it should be a concern and we have to work on it.”

The former Bidvest Wits title-winning captain was happy to win his first trophy with the Buccaneers after they beat Bloemfontein Celtic 2-1 in the MTN8 final in Durban at the weekend‚ but he is worried that they once again had to come from behind for a fourth successive time.

Pirates had to fight their way back when they beat SuperSport United 2-1‚ drew 1-1 against Baroka FC and 2-2 against Cape Town City in their last three league matches.

The same happened against Celtic in the final on Saturday.

It is a scenario that keeps the Bafana Bafana captain awake at night as his team struggles with consistent form in the league‚ where they’ve conceded an average of a goal a match in six matches that produced two victories and four draws.

The Buccaneers had a better defensive run in the MTN8 where they scored eight goals and only conceded one‚ which was in the final against Phunya Sele Sele.

The player better known as Tyson and takes no prisoners when facing attackers is happy with the progress he's made under Bucs coach Josef Zinnbauer.

“Obviously he’s a good coach from Germany. Tactically he’s sound and looks at the ability of each and every player‚" said the defender who grew up supporting Pirates and finally joined the side when Wits sold their Premiership status to Tshakhuma Tsha Madzivhandila of Limpopo at the end of last season.

“I think the guys whom I might have played against before were also able to make me adapt because I’m coming from a different team.

“Learning to play the ball from the back‚ it’s been coming okay.

"Obviously‚ coming from Bidvest Wits where we didn’t have to start our build-ups from the back‚ it’s just a matter of time for me to adapt.

“Coach Zinnbauer has been a good coach and you can see what he’s trying to bring to the team.”

Hlatshwayo is also happy that his defensive partnership with Ntsikelelo Nyauza at the heart of the Bucs defence is developing well.

“I think in football there are different positions whereby you need to understand one another and I’ve always learned that from the goalkeepers‚” the Soweto-born player who is turning 31 on Friday‚ said.

“There’s always one goalkeeper who is going to play but when you look at how they support one another you learn a lot.

"Obviously as centre backs we’re also a spine of the team.

“It’s important to have that communication and be able to understand one another‚ know each other’s strength and weaknesses.

"I can say so far we’ve been building that relationship.”

The South African Football Players Union (Safpu) has added its voice to the mounting calls for the Premier Soccer League (PSL) to give Mamelodi ...
Sport
4 months ago

Football fans lambasted the PSL for rejecting Sundown's request for a postponement of the fixture.
Sport
4 months ago

The PSL stunned the nation when they said the police are investigating certain issues‚ and therefore the solemn gesture would not be observed.
Sport
4 months ago

Former Mamelodi Sundowns coach Pitso Mosimane has shared his sadness at the passing of his former player Motjeka Madisha at the weekend.
Sport
4 months ago

Another match‚ another unbelievable and costly howler by goalkeeper Itumeleng Khune as Kaizer Chiefs produced a limping performance against ...
Sport
4 months ago

Mamelodi Sundowns beat TS Galaxy 2-0 in a league match played at Loftus on Tuesday night to maintain a two-point lead at the top of the premiership ...
Sport
4 months ago
Next Article