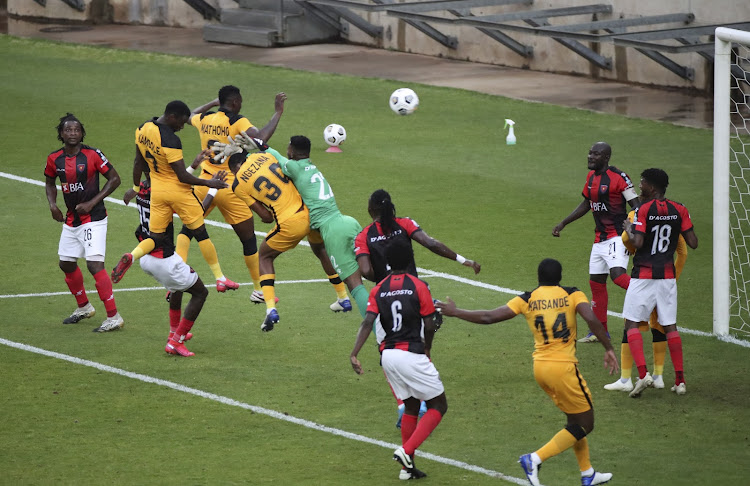 Lazalous Kambole hit the post with a header as Kaizer Chiefs failed to make use of the home advantage.
Image: Gavin Barker/BackpagePix

It has been a trying start to Gavin Hunt’s tenure at his first big three club‚ and the biggest of them all‚ Kaizer Chiefs.

Chiefs remain the country’s largest club in terms of support‚ but five unprecedented previous seasons without a trophy have been a clear indication that Amakhosi have fallen far behind SA’s currently most successful team‚ Mamelodi Sundowns‚ in ambition and success on the field.

It has shown as Hunt – carrying four league titles – has arrived to inherit a squad that is ageing and short on real quality‚ and reeling from their inability to reverse the barren spell with an unlikely Premiership title chase under Ernst Middendorp in 2019-20’s 50th anniversary campaign.

Chiefs’ two-window transfer ban – where big three rivals Sundowns and Orlando Pirates swept up Covid-19 bargain deals in preseason and bolstered immensely – has also clearly affected Hunt’s planning‚ as he would have like to rebuild in key areas.

As Chiefs sit in 13th place in the DStv Premiership with a single win from eight matches by the Christmas break‚ TimesLIVE proposes five steps that might see Hunt rescue some face from a floundering 2020-21 season:

Hunt’s winning teams – from Seven Stars to Moroka Swallows‚ through the three-time successive league-winning SuperSport United and trophy-hungry Bidvest Wits – were always built firstly on uncompromising steel in their football. Once the physical battle is won‚ then the rest can follow has been the coach’s go-to‚ simple and effective recipe for success.

The Chiefs of 2020-21 have been the most notably flaky combination under Hunt in decades. The coach appears to have struggled so far to instil the iron in Amakhosi’s play at a big three club used to an emphasis on ball-playing.

Chiefs’ four draws and a defeat by a solitary goal (2-1) to SuperSport United meant they ended 2020 in continued unconvincing fashion‚ but did suggest Hunt was starting to at least make his team hard to beat. Now he needs the next step of making Chiefs hard to not lose against.

* Light a firecracker under his prima donnas

There are some big names at Chiefs who do not appear to be putting in the effort required for a jersey of the great club’s stature. Perhaps Hunt has been reluctant at a big club to employ his normal notorious hair-dryer treatment. Perhaps it’s time to find the hair-dryer’s “on” button again.

* Figure out who his best goalkeeper is

That Itumeleng Khune has played five of Chiefs’ eight PSL games in 2020-21‚ and Daniel Akpeyi three‚ and the former was fielded in three of Amakhosi’s last five league and cup games‚ and the latter two‚ suggests Hunt was yet to figure out who his No.1 keeper is by Christmas.

It has not helped that neither has been in convincing form. Goalkeeper-coach Lee Baxter has a job to do getting the Bafana Bafana and Nigeria glovemen back to their form they have displayed internationally. They should be challenging each other to greater heights‚ rather than fumbling around as they have been this campaign.

The former Mamelodi Sundowns pairing of Khama Billiat and Leonardo Castro should be a jewel in any team’s attacking crown. They have been infuriating this campaign at Chiefs.

Both get into good positions and show good touches‚ but strike the woodwork as often as they miss the target.

Castro’s brace in a 2-2 away league draw against Golden Arrows promised an end to the Colombian’s drought‚ but there has not been a strike since. Billiat finally got off the mark in Chiefs’ fourth-last match of 2020‚ the 2-2 home draw against Black Leopards.

If the Zimbabwean is to find any semblance of consistency‚ though‚ and improve significantly on last season’s dismal two goals‚ he‚ like Castro‚ will need a lot more effort shown in application.

* Figure out what’s gone wrong with the underachievers

Lazarous Kambole‚ Siphelele Ntshangase‚ Dumisani Zuma – Chiefs have their share of big-name signings in their squad who unfathomably have just not lived up to reputation.

Kambole signed highly rated from Zesco United last season on the back of notable Caf Champions League exploits‚ but has yet to fire in the gold and yellow.

Ntshangase has had a storied existence at Chiefs since his big deal was concluded from Baroka FC in January 2018‚ with a procession of coaches battling to figure out how to utilise the skilful‚ gifted attacker with an eye for a delicious pass. Fans of the player feel Hunt’s predecessor Ernst Middendorp killed the player by sidelining him.

Zuma had a spell where he was effective last season under Middendorp as Chiefs challenged for the title‚ but faded notably. He has played just twice in the league under Hunt.

For all three‚ the challenge would appear to be one half mental‚ and about restoring confidence; and the other half about how to utilise them in effective roles‚ and have them fulfil those roles to a coach’s demand fully.