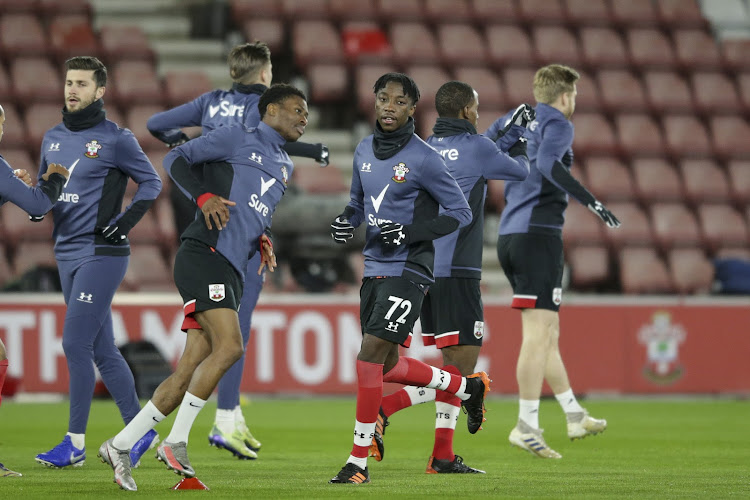 Kgaogelo Chauke (No.72) warms up with his Southampton teammates before a Premier League match against champions Liverpool at home at St Mary's on the south coast.
Image: Jones/Getty Images

The South African Football Association (Safa) might find themselves embroiled in a tug-of-war with England for the international services of 17-year-old Kgaogelo Chauke‚ who was on the bench in Southampton’s Premier League win against Liverpool this week.

South Africa Under-23 coach David Notoane told TimesLIVE that the teen midfield prospect‚ who he named in a 78-man preliminary squad in February for the 2020 Tokyo Olympics‚ which were postponed by Covid-19 to this year – remains firmly on his radar.

However since then England have also called up Chauke to an Under-18 national training camp in November‚ and Safa might have to move with uncharacteristic haste to secure the teen’s services for South Africa’s Olympic squad or other junior national teams.

“Kgaogelo Chauke is definitely one of the players that we want to have a look at before we make the final selection for the Tokyo Olympics‚” Notoane said of Chauke‚ whose parents moved from Pretoria to England when he was one.

“He is definitely on the radar for the Olympics together with the likes of Khanya Leshabane at Leicester City‚ Philippe Sandler at Manchester City‚ Ricardo Schutte at CD Mirandés in Spain and Sphephelo Sithole who is with Belenenses SAD in Portugal.

“I have always said that any talented young South African player who plays at a high level and is showing signs that he can compete will get an opportunity.

"We are working behind the scenes going through video material and looking at different players and what they can bring.

“Kgaogelo is a player who will definitely bring a different perspective to our game‚ similar to [Vitoria Guimaraes striker] Lyle Forster because they are big and strong.

“Sithole was called up for the Saudi Arabia trip [the SA Under-23s played two friendlies in November] but unfortunately his club did not release him and Covid-19 issues also played a little bit of a role although they didn’t say so.

“We also had Khanya during the qualifier against Zimbabwe for Afcon‚ so as the Under-23 technical and Safa the door is not shut on anyone and that for me is the benefit of the postponement of the Olympics.”

Good time away with England🦁🤞🏾 pic.twitter.com/77nX3iQjsV

Chauke tweeted of the inclusion on the bench: “Good experience‚ hopefully first of many”.

The Mamelodi-born youngster’s parents moved to the UK when he was one‚ and his nationality usually listed as English.

He is apparently keen to play for the country of his birth‚ but England do also have designs on the player.

Mamelodi Sundowns booked a place in the group stages of the Caf Champions League with a 3-1 first round, second leg win over Jwaneng Galaxy of ...
Sport
1 year ago

SuperSport United coach Kaitano Tembo is worried about what to expect from Chippa United‚ who recently appointed Dan ‘Dance’ Malesela as head coach ...
Sport
1 year ago

'Pirates, you are next' - Mzansi blown away by high-flying Moroka Swallows