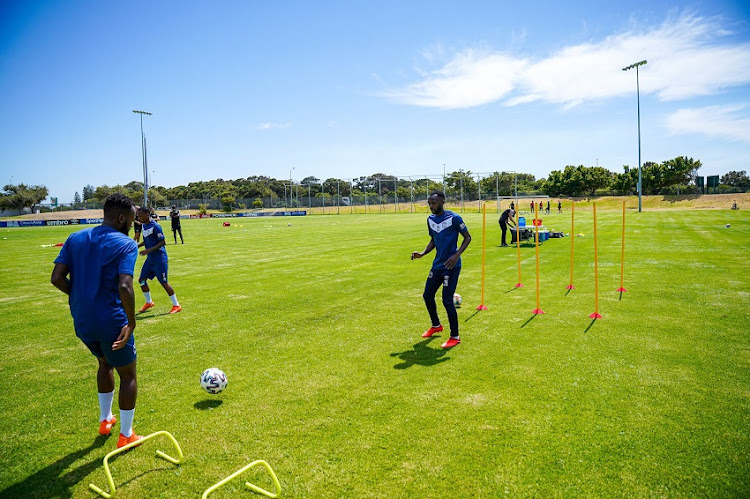 Cape Town City have strengthened their striking force with the signing of former Orlando Pirates and Tshakhuma Tsha Madzivhandila striker Justin Shonga ahead of their clash against Kaizer Chiefs in Cape Town on Saturday.

The Zambian international has spent less than six months in Limpopo with Tshakhuma after leaving the Buccaneers at the end of the 2019-20 season.

He played seven matches and scored one goal for TTM but City‚ who have tied the striker to a three-year contract‚ are confident he’ll be a fitting replacement for Kermit Erasmus who departed to join defending champions Mamelodi Sundowns in October.

“I would like just to appreciate the chairman [John Comitis] of the club for taking into consideration signing me to this club‚” said Shonga after arriving in Cape Town on Monday.

“Cape Town City is a good club and they’ve got good players and I’m so excited to join the club. I’m happy being here.

Soccer boss says it's safe to play, even as cases rise

The Premier Soccer League does not plan to suspend the 2020-21 season despite SA being knee-deep in the second wave of Covid-19, league chair Irvin ...
Sport
1 year ago

“Cape Town is a good place and I’m just looking forward to fitting in into the team. I’m hoping to have a good time and working hard with the team‚ win games and win trophies with the team.

“The club has a good reputation in terms of winning. I would say I will work hard for the people of Cape Town and we’ll try to achieve more.

“I’m looking forward to good days here in Cape Town and I would like to say to the fans I appreciate their support that they’re giving to Cape Town City despite playing in stadiums that have no supporters right now.

“But we’ll keep on working hard to make sure that we make them proud.”

The 24-year-old Shonga joined Pirates from Nkwazi FC in Zambia in 2016 and was part of the Bucs combination who failed to deliver any trophy in the past six seasons. Bucs broke their duck in November last year when they won the MTN8‚ after Shonga and Zambian counterpart Augustine Mulenga (now at AmaZulu) having left before the start of the current campaign.

Shonga scored 17 goals in 77 appearances for the Buccaneers and had been linked with Egyptian giants Zamalek before City snapped him up.

City may field Shonga in Saturday’s game as the PSL window would have been opened on Friday for clubs wishing to register new players.

The Citizens‚ currently fourth on the DStv Premiership table and eight points behind table-toppers Sundowns‚ have had attacking midfielder Mduduzi Mdantsane to thank for scoring seven of their 16 league goals this season after the departure of Erasmus.