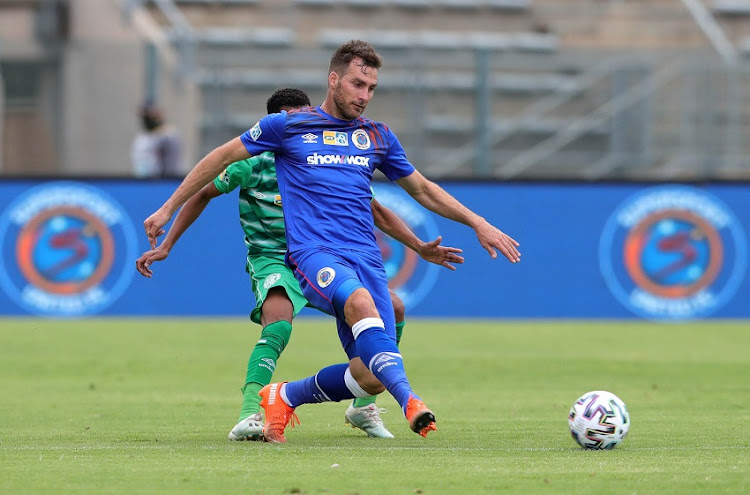 Globler’s winner also took his league tally to 10 in 10 league matches this season and keeps him on top of the Premiership goal scorers’ chart and United second and two points behind Mamelodi Sundowns in the standings.

“It’s an unbelievable feeling‚” said Grobler after the Celtic match in which United won their second successive league game and stretched their unbeaten run to six matches‚ of which they have won five.

SuperSport United captain Ronwen Williams has called on his teammates to stand-up and be counted as they continue with the busy schedule through ...
Sport
10 months ago

“I think when people mentioned the 57 goals, it felt a long way [away] at the time - and I think I was about six goals away. Now that I got to it last week and equalled it‚ I thought to myself, this could be the toughest part - to break and get one more.

“But fortunately enough, it happened today [Wednesday]. As I said in many interviews‚ for me the club has been very good to me over the years.

“They’ve done a lot for me‚ they’ve stuck with me through thick and thin‚ through the injuries‚ and I think it’s just my way of repaying the club for the faith they’ve shown me.

“It’s a great club and a very prestigious club‚ so ja‚ I’m very honoured to have achieved that.”

SuperSport United coach Kaitano Tembo says keeping Bradley Grobler fit to play has been a large part of the striker’s white-hot form in 2020-21.
Sport
11 months ago

United coach Kaitano Tembo also hailed Grobler for his achievement and credited the club’s medical and conditioning personnel for looking after the Bafana Bafana striker‚ who turns 33 on January 25.

“Look, I’m very proud of him. I think he’s done well in the past two seasons. He’s been scoring goals for us‚ we don’t doubt his quality‚” said the United coach.

“He’s been previously hampered by injuries but we’ve tried to manage him and make sure that he stays match fit and always available at training and in matches.

“But credit should also go to the medical team as well as conditioning team. They’ve always given him a programme and focus to make sure that he’s always fit‚ he's always available and is enjoying his game.”

Grobler’s also in-form striking partner‚ Thamsanqa Gabuza‚ opened the scoring for United and took his league tally to five in the victory against Celtic on Wednesday.

Daniel Akpeyi is adamant Amakhosi won’t be relegated, saying the team is hoping for a turnaround on Wednesday
Sport
10 months ago

Makhubedu has plan to turn around ambitious Sekhukhune

Sekhukhune United coach MacDonald Makhubedu has pledged to hit the ground running in his new job as head of the ambitious GladAfrica Championship ...
Sport
10 months ago