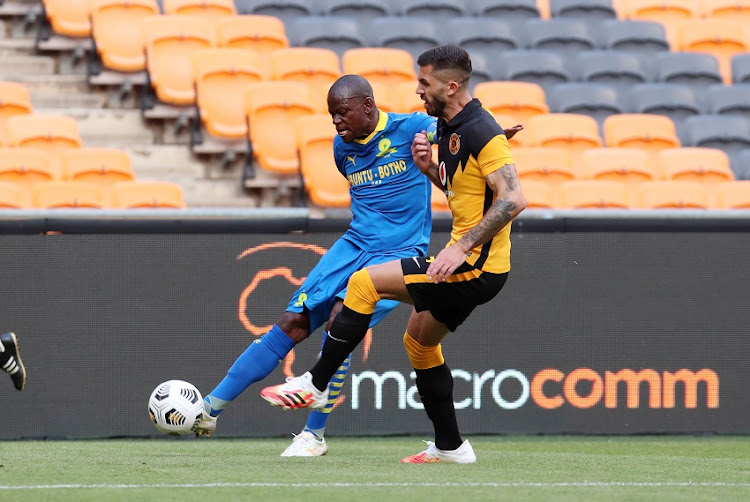 Hlompho Kekana of Mamelodi Sundowns is challenged by Daniel Cardoso of Kaizer Chiefs during their DStv Premiership match at FNB Stadium on October 24 2020 in Johannesburg.
Image: Muzi Ntombela/Backpagepix/Gallo Images

A second win in succession could provide signs Kaizer Chiefs are on the mend when they tackle Cape Town City in their DStv Premiership match at the Cape Town Stadium on Saturday‚ says defender Daniel Cardoso.

Amakhosi won their second match this season when they beat AmaZulu 1-0 at Kings Park in Durban on Wednesday, and Cardoso feels the club can build on that victory since away is the only place where they have notched their two wins in 10 league matches.

A 1-0 victory against Chippa United at Nelson Mandela Bay Stadium in their second match of the season in October was the only other time Chiefs won a league match in the 2020-21 campaign.

Gavin Hunt’s team have dropped eight points away in three other matches against SuperSport United (2-1)‚ Swallows FC (1-0) and Golden Arrows (2-2).

After failing to win in seven league matches before Samir Nurković got a winner in his first start this season against Usuthu on Wednesday‚ Cardoso believes winning against City will help improve the confidence of battling Amakhosi.

Chiefs see the importance of being Ernst

In football you have giant killers, and in SA soccer there is the Kaizer Chiefs killer, Judas Moseamedi, who banged two past his favourite team to ...
Sport
1 year ago

“It was a very important win for us to boost our morale‚” Cardoso said.

“It wasn’t the easiest game we had‚ but we keep going from here.

“Three points is what we needed and we certainly got them. I think we can only move forward from here on. You could see the whole team was fighting and we hope to go to our next game against Cape Town City on the weekend‚ another tough game‚ and do the same.”

If we can put another game with fighting spirit like we did against AmaZulu‚ we should walk away victorious.

Cardoso said after dropping to just above the relegation zone and only surging up to the 10th position after the win against Usuthu‚ it us important that Chiefs gain maximum points in Cape Town to continue moving up the log.

“If we can put another game with fighting spirit like we did against AmaZulu‚ we should walk away victorious‚” said the 32-year-old defender.

“I think that [an AmaZulu win] will boost us going into this game as we play them in Cape Town and obviously playing back-to-back it’s going to be through recovering properly‚ which we are.

“We had a day off today [on Thursday] and we’re have gone back to freshen things up and to get our tactics right in training [on Friday].

“We hope to go to the weekend’s game with another win and we want to thank our supporters for always being there behind us and to continue supporting us even when the times are tough.

Daniel Akpeyi is adamant Amakhosi won’t be relegated, saying the team is hoping for a turnaround on Wednesday
Sport
1 year ago

A disappointed Benni McCarthy has taken positives from AmaZulu’s 1-0 DStv Premiership loss to Kaizer Chiefs in Durban on Wednesday.
Sport
1 year ago

Itumeleng Khune has been left out of Kaizer Chiefs’ squad that has travelled to Angola to face Primeiro De Agosto on Tuesday but key striker Samir ...
Sport
1 year ago