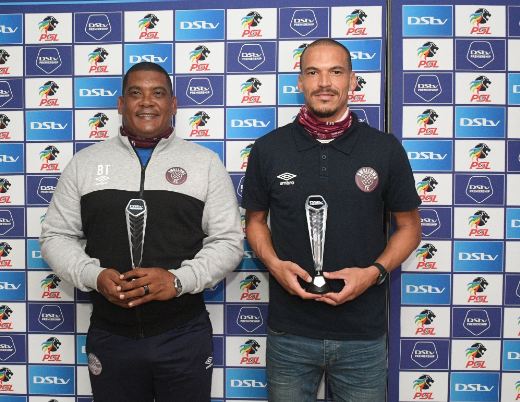 The Swallows FC fairytale continued on Tuesday after crafty mentor Brandon Truter and in-form striker Ruzaigh Gamildien walked away with the Premier Soccer League's (PSL) coach and player of the month awards respectively for December/January.

This was Truter's second gong in a row after he won the selfsame accolade alongside Mamelodi Sundowns star Themba Zwane in October/November.

The second-placed Swallows were promoted to the topflight this season and Truter‚ who is coaching in SA's elite league for the first time‚ cautioned his charges to remain grounded as they continue to exceeded expectation in their maiden campaign in the premiership.

“We’ve taken note of how our first 10 games have gone‚" said the Cape Town-born on Tuesday.

"But now we need to focus on the next 10. So far we’re in a good space but our focus is now on [Wednesday night's] league game [against Chippa United]."

The 43-year-old Truter admitted on Tuesday that the recently-promoted Birds have had a dream start to life in the premier division of SA football and he never expected his charges to be snapping at champions Sundowns' heels every week in their maiden season in the topflight.

"To be honest‚ no‚ we didn’t expect it [to be challenging Sundowns].

"But we’ll keep going and our next goal is to end up [as high] as we possibly can [in the premiership standings]."

But Truter is not surprised by the blistering form displayed by the 31-year-old Gamildien‚ a player he guided in the development ranks when he was still a youngster in Cape Town.

“About Ruzaid‚ I’ve known him for long and I’m encouraged. He has the potential to challenge for the top goalscorer [award] in the league.

"But like I’ve told all the players‚ he must not get carried away and must focus on the next step."

Truter has kept the Dube Birds flying with a 11-match unbeaten run in the league and while they are second on the standings‚ they have the same number of points as the leaders Sundowns. Truter has seemingly picked up where he left last season as he spearheaded the club's promotion push from the GladAfrica Championship to the topflight last season.

Champions Sundowns are top of the table by virtue of a better goal difference but Swallows could return to the summit on Wednesday if the leaders falter against Celtic on Tuesday and the Birds are able to dispatch Chippa United 24 hours later.

Gamildien has banged in eight goals in 11 league matches and while there is still some way to go before the end of the season in May‚ Swallows will be happy with their progress so far.

After the midweek fixtures‚ Sundowns and Swallows will meet at the Lucas Moripe Stadium on Saturday in a mouth-watering top-of-the-table clash that should give an indication of where these two teams really are after 11 matches.

"In the period between 5 December and 10 January‚ Swallows FC won three games (Maritzburg United‚ Black Leopards and Cape Town City) and drew twice‚ including an impressive come-from-behind victory away in Thohoyandou at Leopards‚" the PSL said on rewarding Truter and Gamildien on Tuesday.

"Truter and Gamildien edged fellow colleagues in Mamelodi Sundowns’ Manqoba Mngqithi as well as SuperSport United duo of Kaitano Tembo and Bradley Grobler‚ who were also hugely praised for the outstanding job they’ve done for their sides during this period‚" the league added.

Abdul Bhamjee was more than a PRO to the National Soccer League (NSL)‚ which formed from 1985‚ and was also a driver of its marketing and financial ...
Sport
9 months ago

Golden Arrows brace for a backlash from wounded Orlando Pirates

Golden Arrows coach Mandla Ncikazi is expecting a backlash from a wounded Orlando Pirates when the two sides meet in a potentially delicious league ...
Sport
9 months ago

Champions Mamelodi Sundowns have a squad that is the envy of most coaches in the league but mentor Manqoba Mngqithi does not want to be drawn into ...
Sport
9 months ago