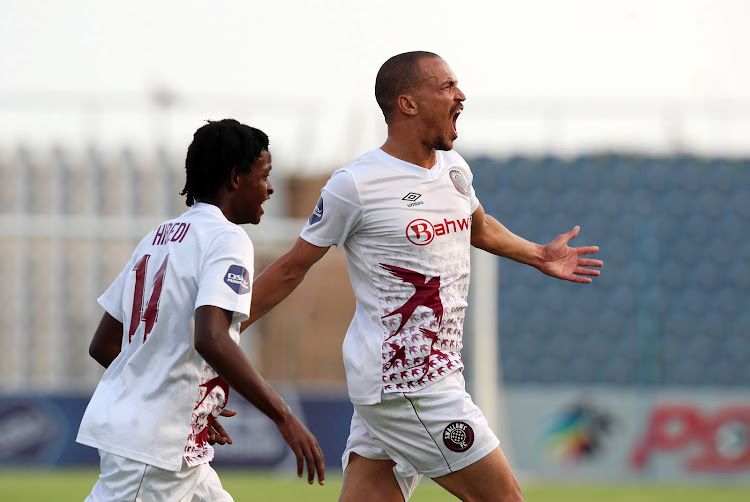 Ruzaigh Gamildien was on target again for Swallows FC but the DStv Premiership newcomers could not capitalise as they allowed Chippa United back into the match.
Image: Muzi Ntombela/BackpagePix

Swallows FC missed out on an opportunity to go top of the DStv Premiership standings after they were held to a 1-1 draw by determined Chippa United at Dobsonville Stadium on Wednesday afternoon.

Swallows were the first to get their name on the scoreboard after Ruzaigh Gamildien unleashed a stunning volley in the first half‚ but a thunderous shot from close range by Kurt Lentjies in the second half ensured a sharing of the spoils.

The result also means that second-placed Swallows remain unbeaten and they are tied on 26 points with leaders Mamelodi Sundowns‚ who remain top of the standings courtesy of a superior goal difference.

It gets even more interesting for Swallows and Sundowns as they have a potentially explosive top of the table clash at the Lucas Moripe Stadium on Saturday.

For Chippa the away point they gained in Soweto doesn’t mean much as they have now dropped one place down on the standings after TS Galaxy pulled off a 3-0 win over Maritzburg United.

Chippa coach Dan Malesela will‚ however‚ welcome the point as his team showed fighting spirit against the high-flying Swallows that has enjoyed a good run with seven wins and five draws.

Swallows took the lead after 11 minutes from player of the month Gamildien who blasted home a wonderful volley that Chippa goalkeeper Ayanda Mtshali could do very little about.

Gamildien received a telling pass from Zaphaniah Mbokoma deep in midfield and he controlled the ball with his chest‚ despite attention from Isaac Nhlapo‚ before firing in his ninth goal of the season.

With his beautiful strike‚ Gamildien came to within two strikes of current leading goal scorer Bradley Grobler of SuperSport United who is leading the scoring charts with eleven goals.

Chippa tried to force an equaliser before the half time break with Bienvenue Eva Nga‚ Peter Moloisane and Andile Mbenyane on the forefront of their attacks‚ but they could not find their way past Virgil Vries.

Swallows also tried to increase their lead with Mbokoma‚ Gamildien and Kgaogelo Sekgota but the Chippa defence that was marshaled by Nhlapo and Frederick Nsabiyumva stood firm.

Shortly after the restart‚ Mbenyane forced Vries to make a stunning save from close range as the visitors continued to search for the equaliser.

After 70 minutes‚ Chippa thought they have pulled one back but Vries reacted in the nick of time to stop Mbenyane’s thunderous long range shot from crossing the line.

Chippa finally got it right four minutes later when substitute midfielder Lentjies rifled home a thunderous shot from inside the box after Swallows failed to clear the ball following a corner kick.

The ‘flamboyant’ PRO, who was behind the construction of SA’s first football stadium, drove unity in soccer: Jordaan
Sport
1 year ago

Abdul Bhamjee was more than a PRO to the National Soccer League (NSL)‚ which formed from 1985‚ and was also a driver of its marketing and financial ...
Sport
1 year ago

The Swallows FC fairytale continued on Tuesday after crafty mentor Brandon Truter and in-form striker Ruzaigh Gamildien walked away with the Premier ...
Sport
1 year ago