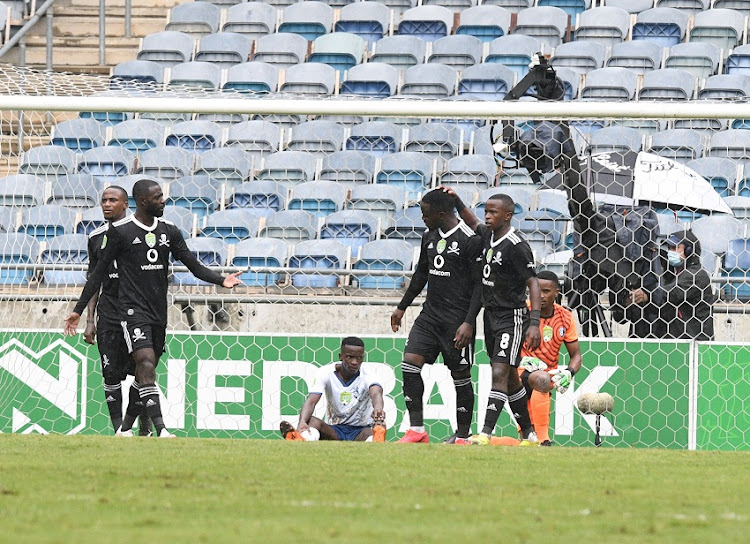 Orlando Pirates laboured but ultimately produced what was necessary to progress past defensive Uthongathi FC 1-0 at Orlando Stadium in the Nedbank Cup last-32.

On a wet, but seemingly not overly-slippery surface, Gabadinho Mhango’s 63rd-minute strike earned MTN8 champions Bucs a place in the last-16 of the Covid-19-affected season’s only other cup.

Pirates coach Josef Zinnbauer had made seemingly too many changes — four — from a winning combination in the Soweto derby against Kaizer Chiefs to Saturday’s 2-0 defeat away to Golden Arrows, both in the league.

With an entirely different match situation in the cup against GladAfrica Championship campaigners, coming off a defeat, four more changes were perhaps more understandable. Bucs’ lack of continuity, though, and many switches of systems — Saturday was a 4-3-3 — do seem to be confusing the players.

Pitso Dladla’s Uthongathi came into the game on a solid start in the NFD of four wins, five draws and two defeats to be in sixth place.

Such matchups can be tricky. The bigger team need to take the scruff of the proceedings against upstarts who will interpret a hint of weakness as an opportunity to make a name for themselves.

Bucs meandered despite unsurprisingly easily enjoying territorial advantage in the first half. Uthongathi’s containing game was neat enough, but Pirates’ lack of dynamic movement at pace also did not overly stretch it.

Bucs’ best opportunity of the opening half came when their most energetic players, Siphesihle Ndlovu and Motshwari, combined for the latter shoot just off target from the right edge of the area in the 25th. Two minutes later Ndlovu struck into the arms of goalkeeper Xolani Ngcobo.

Pirates’ body language was to lift the tempo from the restart. Against NFD opponents growing in confidence the longer they did not concede, though, it takes a little more than looking like you want to try harder.

Bucs were playing with fire and just after the hour Nkosiyazi Maphumulo’s sublime turn on the left to evade Sesane and Happy Jele’s twin challenge saw the playmaker burst down the left and feed the run of Khetukuthula Ndlovu, who shaped a shot wide.

It was a fine opportunity to Uthongathi, but when the KwaZulu-Natal side could not take it, Bucs seemed likely to accept the lifeline. They did when Thabang Monare’s chip upfield found Deon Hotto on the left to chest, turn, and feed the diagonal pass to Mhango in front of his marker who produced a simple first-time tap-in.

Lamontville Golden Arrows coach Mandla Ncikazi has acknowledged that the AmaZulu team they’ll be meeting in the last-32 of the Nedbank Cup on ...
Sport
9 months ago

Goalkeeper Itumeleng Khune remains a “hugely important” player to Kaizer Chiefs‚ even as he has lost his starting place between the posts to Daniel ...
Sport
9 months ago

Richards Bay coach Simo Dladla is hoping that his players are not daunted by the big occasion of their Nedbank Cup last-32 meeting with Kaizer Chiefs ...
Sport
9 months ago

Benni McCarthy says it won’t get any easier for AmaZulu FC when they engage in-form neighbours Lamontville Golden Arrows in the Last 32 of the ...
Sport
9 months ago