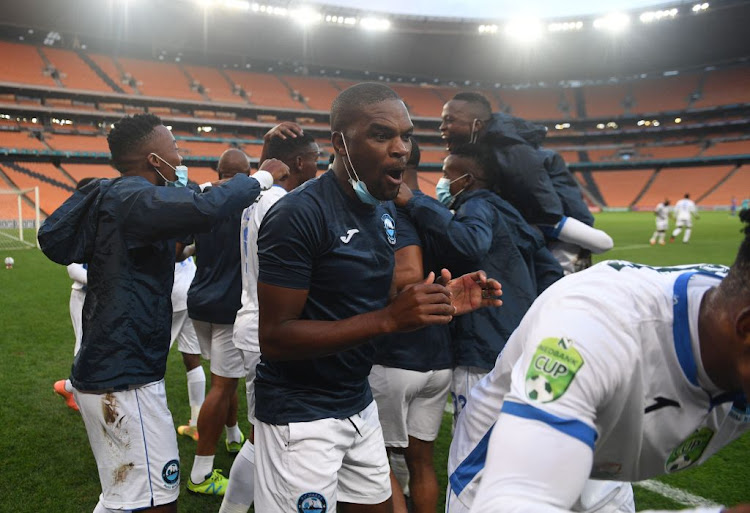 Kaizer Chiefs have delivered some ignominious results in the Nedbank Cup over the years and made another mortifying exit when lower tier side Richards Bay put them to the sword at FNB Stadium on Sunday afternoon.

The visitors claimed a famous triumph when goals from Thabani Dube and substitute Siyabonga Vilane were enough to earn them a shock 2-1 win that Chiefs coach Gavin Hunt described as one of the most embarrassing losses in his coaching career.

A 10-men Chiefs had appeared to claw their way back from a goal down after Leonardo Castro cancelled Dube's 29th minute opener with the equaliser 14 minutes from time.

But Vilane had other ideas and scored the winner in the 90th minute to confirm Hunt's worst nightmare in this Last 32 encounter.

“The first word that comes to me is 'embarrassing'. On a personal level I don't think I have ever lost to a first division side in 26‚ 27 years (in football). It was bit embarrassing from that perspective‚” the bewildered Chiefs coach said in his post-match interview.

The visitors never showed their more illustrious counterparts any respect and proved  they had not travelled to Johannesburg to mess around when Dube beat Chiefs goalkeeper Daniel Akpeyi with a header after a corner.

The goal was hardly fortuitous as Richards Bay had gamely traded blows with their hosts for long stretches and rose to the occasion‚ desperately in search of an opportunity to claim a famous scalp.

They defended the opening goal as if their lives depended on it and deservedly went into the halftime break with their lead very much intact. When the two sides returned from the halftime break‚ it became apparent that the longer the game progressed with Chiefs still trailing‚ the greater the chance that coach Simo Dladla's upstarts would execute a shock result in their hosts' FNB Stadium backyard.

Chiefs then made life difficult for themselves when Siphosakhe Ntiya-Ntiya‚ who was already on a yellow card‚ was shown the red card for his second booking of the afternoon in the 64th minute.

Sensing blood against the 10 men‚ Richards Bay shifted gear and tried to make their numerical advantage count against a team that continues to blow hot and cold this season.

To their credit‚ Chiefs never dropped their heads in the face of adversity and managed to pull a goal back through Castro.

Castro could have won the match three minutes from time when he rose to meet a cross from Dumisani Zuma but somehow headed over the bar‚ with goalkeeper Malcom Jacobs at his mercy.

Chiefs have lost to lower tier sides on numerous occasions in the past but the one that stings the most is their defeat in the final of the Nedbank Cup in Durban in May 2019.

Chiefs boss Kaizer Motaung admitted at the time that his club's embarrassing defeat to lower tier side TS Galaxy ranked as the lowest point of his career as chairperson of the ailing team.

A delighted Dladla said they travelled to Johannesburg with a plan and they executed it to absolute perfection.

Kaizer Chiefs have promoted another development product‚ midfielder Sabelo Radebe‚ to their first team and coach Gavin Hunt has said he has high ...
Sport
11 months ago

Richards Bay coach Simo Dladla is hoping that his players are not daunted by the big occasion of their Nedbank Cup last-32 meeting with Kaizer Chiefs ...
Sport
11 months ago

Goalkeeper Itumeleng Khune remains a “hugely important” player to Kaizer Chiefs‚ even as he has lost his starting place between the posts to Daniel ...
Sport
11 months ago